Share All sharing options for: JUCO Wing Titus Rubles Commits To The Bearcats 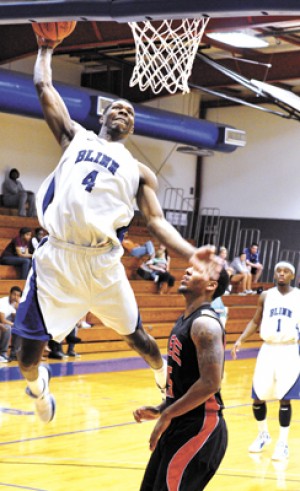 The fruits of the Bearcats sweet 16 run didn't take long to appear as JUCO Wing Titus Rubles has committed to the Bearcats this morning. Rubles sort of personifies the new direction the Bearcats are taking on the offensive side of the ball. Rubles is a versatile athletic wing who can put the ball on the floor and finish around the basket. He compliments that aspect of his game with an OK outside shot (28 per cent on threes). Best of all he is a rebounding fiend. For the season he averaged 16-10-2 he also averaged a shot and a block per game for the Blinn College Bucs*.

Rubles has what in the past would have passed for forward size for the Bearcats. But he will play on the wing in the new four out one in look. Though it could very well be a five out none in look if Rubles is as athletic as being advertised. The biggest selling point on Rubles from my perspective is that versatility. Its the one thing UC has had going for them during this run. You can never have too much flexibility in personnel.

The Bearcats have one scholarship left in the class of 2012. The top target for that ship is Chris Obekpa, who has already visited the Bearcats. Obepka isn't expected to decide until April.