Pet Play's; Willie Taggert And The Ruthless Exploitation of Mismatches

Every play caller has a play that they love. A situational play that they go to when they need a first down, or a big play, or a negative play on defense. This series is all about identifying and examining those schemes for each of the Bearcats upcoming opponents. Today's edition, the new look South Florida Bulls

Share All sharing options for: Pet Play's; Willie Taggert And The Ruthless Exploitation of Mismatches

By now everyone knows what Willie Taggart is about. He is the Tampa guy who is coming back home. He is the miracle worker of Bowling Green. He is the Jim Harbaugh acolyte who is going to instill toughness and discipline and other meaningless buzz words to a South Florida program bereft of all those things. He is something else too, a mathematician.

One of the things that distinguished Harbaugh's Stanford teams, and continues to distinguish his 49ers is how they play with the numerical advantages that Colin Kapernick provides. Taggart is cut very much from the same cloth. He wants to get the math on his side so that he can attack with impunity.

At WKU they did that by building a strong running game with Bobby Rainey (back to back 1,600 yard seasons in 2010 and 11) and Antonio Andrews (1,700 yards last year). They run behind a big offensive line and a seemingly endless supply of tight ends. From there they can get the play action game going. If that sounds familiar it should, its still the general game plan at Stanford.

Its in the passing game where Taggart and co use the math to their benefit. They often overload formations by playing two TE's on the same side. That is generally a strong run signal, and defenses react accordingly by matching strength with strength. But that adjustment can shift the advantage back to the offense if they have a dynamic enough TE. Like this.

Here is the diagram for the play. 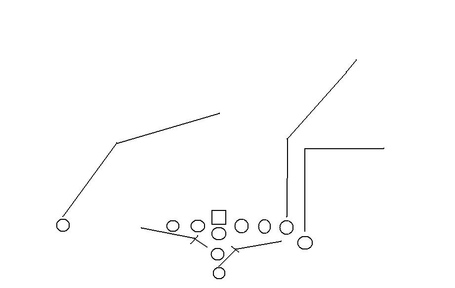 It was 3rd and 13, an obvious passing down. Louisiana Monroe opted to blitz and bring the house. They had 5 guys on the line of scrimmage and 10 within 8 yards of the LOS so it was telegraphed. Enough for the running backs to know to skip the play fake and go straight to pass protecting. That is the key of the play, which enabled Kawaun Jakes to get the pass off.

The other is the match up between Jack Doyle and the ULM strong safety. The three Warhawk DB's in coverage are in man to man, which gives the advantage to Doyle on the corner route. He is simply too big and too strong for the Safety to effectively cover him if the ball is thrown well, and it was, thanks to the RB's going straight into pass protection buying Jakes the half second he needed to deliver an on target pass to Doyle.

The interesting thing about Taggart and USF is that the personnel really fits what he wants to do. USF was a "spread team" under Levitt and Holtz, but they have always been about the power game. There are differences between what Holtz wanted to do and what Taggart will, but the pieces will fit well enough, if not seamlessly. Sean Price in particular is a guy who will bennefit a great deal from the new offense, and he has the skill set to become very effective.

More from Down The Drive: