When watching Football it is very easy to get duped by the catch all labels that announcers like to use to describe games as they see them. Broadcasters do just as the name implies, trying to appeal to as broad an audience as possible. This is especially true in the last decade or so with the advent, and subsequent proliferation of "spread" offenses. The spread in and of itself is nothing more than a formation, and formations don't define offenses in the least. Afterall there are dozens of programs that have started using the pistol formation, but only one school runs the Pistol Offense, and that's Nevada. The reason I bring this up is that South Florida is a classic example of team where the formations they use don't quite vibe with the plays they run from it. USF lines up in the shotgun the majority of the time, with three receivers at a minimum. But their running game is power based rather than the more conventional (for most shotgun based offenses) inside/outside zone.

One of the staples of the Bulls running game is the inverted, veer drawn up here for your convenience. 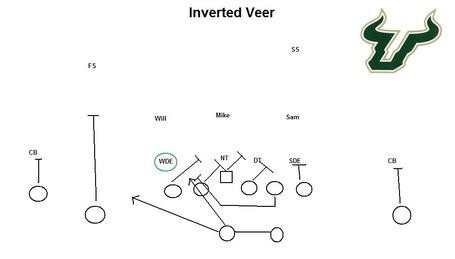 The inverted veer is relatively straight forward. At the most basic level the Inverted Veer get lumped into the basic "read" running game schemes along with the speed option, zone read ect. In a practical sense this just means that the offense leaves one defender unblocked to read off of. If the DE crashes on the QB give it to the RB. In a broader macro sense the only difference between the inverted veer and the zone read is who the QB reads. In its most common form the QB reads the backside end on the zone read. On the inverted veer the QB reads the play-side end, and at a basic level that is the only difference between the Inverted Veer and the Zone Read. Now USF has picked up a wrinkle with their own particular Inverted Veer methodology by marrying the concept to a good old fashioned power blocking scheme, ala Auburn (and Florida before that).

This is the first example of the inverted veer. The Bulls line up in a basic 2x1 shotgun set with Darrell Scott and Lindsey Lamar flanking either side of B.J. Daniels. The wildcard here is Lamar who is a receiver by trade, but with a skill set that implores any offensive coordinator to us him as much as possible. 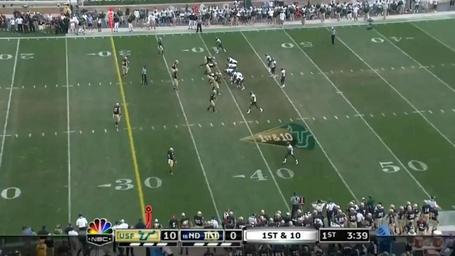 At the snap you notice the Bulls guard Danous Estenor pop up from his stance to pull playside. 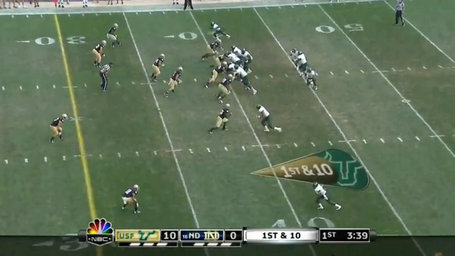 The shape of the play is apparent at this point. You see the other four linemen cave down on the defensive line and some of them combo up to the linebackers. In the backfield Lamar and Daniels begin the mesh phase and Daniels starts to make his read of the lineman. I suppose that it should be mentioned that Daniels is just reading the width of the defender. The play is now just binary code, 1 to keep, 0 to give. 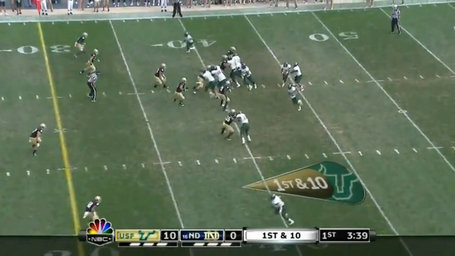 it's a 0. The DE and the MLB are occupying the same gap while the slot receiver cracked down leaving acres of green to the outside. 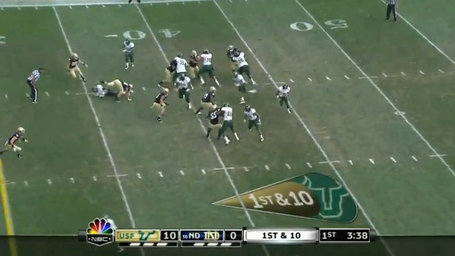 Lamar has the ball with a set edge and a lead blocker. 1st down or better for the Bulls. 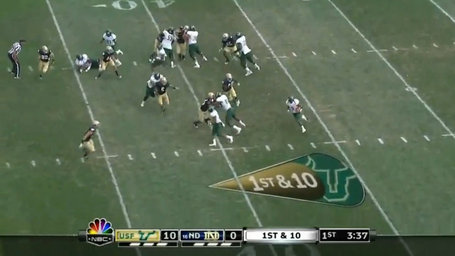 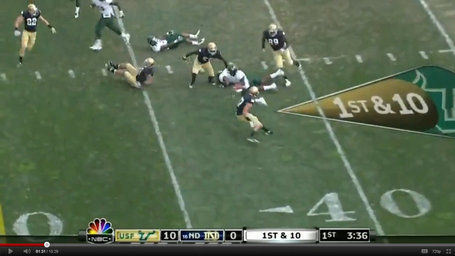 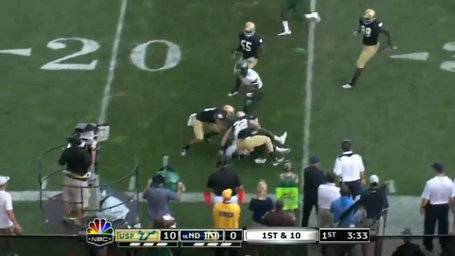 17 yards later the play is over.

That is the Inverted Veer for USF. What makes this play work is the marriage of the read with the power blocking. Daniels made the correct read and Lindsey Lamar was off to the races. The interesting thing about USF's use of this concept is that they have two different ways of running it the one delineated above and a new wrinkle.

This puts that wrinkle on display. USF lines up in a pistol look with two wides, and two TE's. To the defense this looks almost certainly like a run to the right. 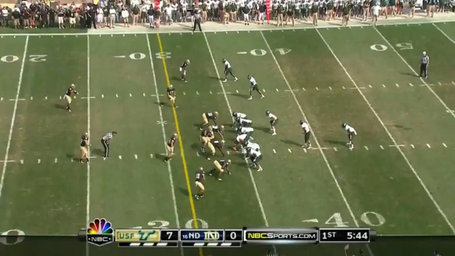 Pre Snap they motion the slot receiver to the left. 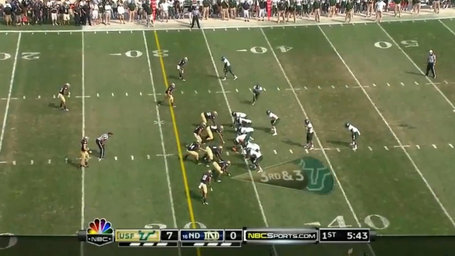 This serves two purposes, it confuses the defenses expectations, and most importantly it moves the boundary corner out of the box and gives USF a numerical advantage in the box. Just count the defenders, seven of them against 9 Bulls. 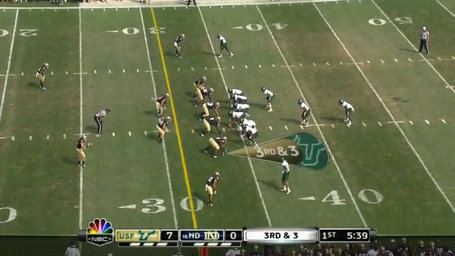 On this play the Bulls add a wrinkle of having Evan Landi coming across the formation behind the line of scrimmage and stalking the DE. This is known as the Wham, which isn't new at all, but is timely.  The read for Daniels is the same, play-side end. For the offensive line that makes this a simple inside zone play. 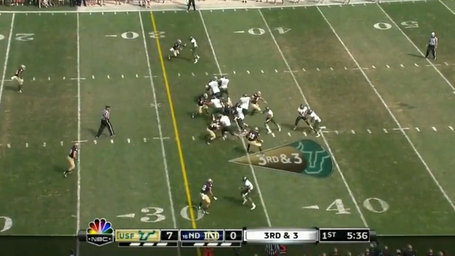 The read for Daniels is the same as before, and again he gives the ball to Scott who has a lane up the middle 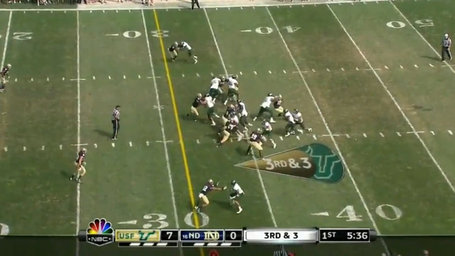 And finally the last example. This time USF skips the pre snap motion and lines up with basically a two TE one WR bunch to the bottom of the screen. 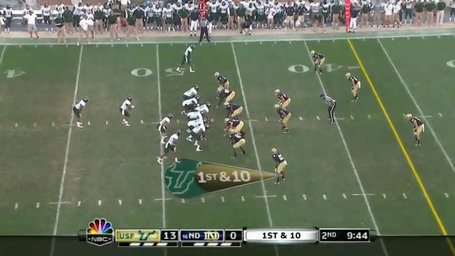 Again Evan Landi is doing the Wham. Also on this frame you can really see Daniels read of the defensive end and again the read of Daniels is nothing more than "is he playing wide or narrow." 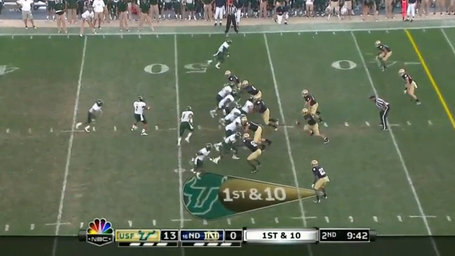 The outside defender is shading inside to take away the running back on the dive, so Daniels keeps. 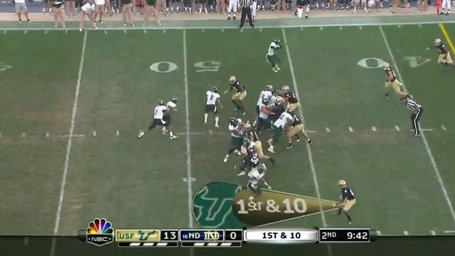 The outside defender crashes down on the RB, despite Daniels having the ball with a lead block from Landi. 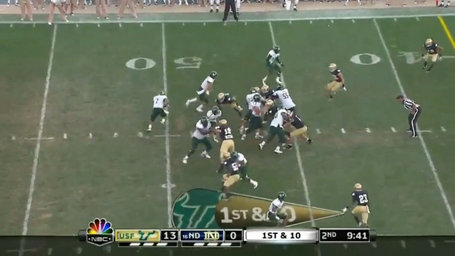 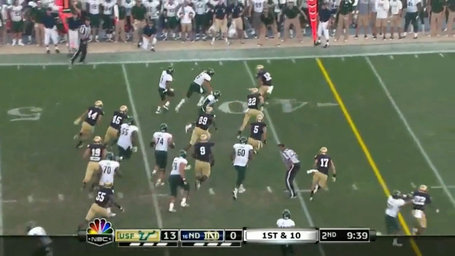 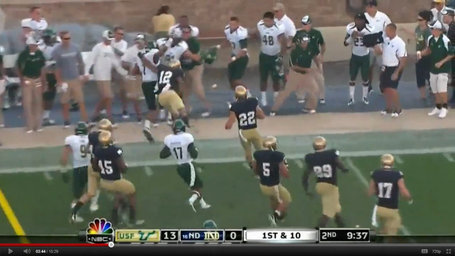 When I went to do my preview of the Bulls from earlier this week I started the process by watching every snap from the Notre Dame game. The thing that pops out is that USF is one of those teams that defies the typical description of a "spread" offense. The Bulls play from the shotgun 70 per cent of the time, but formations don't define offenses. USF has a big physical offensive line that average 303 pounds per man and three big, physical, thumping runners. The formations say spread, but the Bulls are a power offense worthy of Joe Gibbs.