Every play caller has a play that they love. A situational play that they go to when they need a first down, or a big play, or a negative play on defense. This series is all about identifying and examining those schemes for each of the Bearcats upcoming opponents. Today's edition, Miami (oh) Redhawks

Many people thought that the records Ben Roethlisberger would stand for all time at Miami. He set the bar so impossibly high that no one could touch him. Except Zac Dysert did. He does not have the legacy to equal that of Roethlisberger, but he has the records.

There are a lot of explanations for that, Dysert played during one of the most unfortunate stretches in Miami's long history. He took an ungodly amount of sacks behind bad offensive lines, and the running game was often nowhere to be spoken of. And yet Dysert managed to lead offenses that were consistently above average. The key to that, particularly for the last two years, has been in the quick passing game.

Lets play a hypothetical game. Say you are an offensive coordinator, and say that you have a bad offensive line and running backs that struggle to consistently make plays behind that rickety front, what would you do to move the football?

Ideally you stick to the quick passing game, with nothing longer than a three step drop. If you do want to try something vertically, you move the pocket and get your guy on the move in case something breaks down. If you watched the Ohio State or Boise State games from a year ago that is exactly what Miami did.

One of my favorite concepts from the Miami quick game is drive. 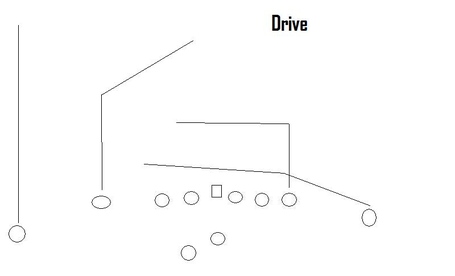 This is not the formation that Miami ran the play from, but the concept is the same, to get your fast wide receiver sprinting full bore into a gap that should be cleared out by the inside receivers 10 yard in route. Fast and very, very effective. Its very effective because it puts the linebacker in no mans land. He must either honor the tight ends route, which starts vertically and forces the backer to give ground and putting him in a position where he can't respond to the receivers drive route. He can jump the drive, but that opens up a gap for the QB to hit the TE before he even breaks his route inside. Its easy football.