Every play caller has a play that they love. A situational play that they go to when they need a first down, or a big play, or a negative play on defense. This series is all about identifying and examining those schemes for each of the Bearcats upcoming opponents. Today's edition, T.J. Weist and the Deep Crossing Pattern

That's right, UConn's new offensive coordinator is Cincinnati's former Wide Receivers coach, and emergency Belk Bowl offensive coordinator. Beyond the Belk Bowl Weist has experience as a play caller, he was the OC at Western Kentucky from 2002 through 2006, back when the Hilltoppers were playing FCS ball, even winning a national title. So he is not canvas. But I think UConn will still wind up relying heavily on some of Weist's recent experiences with Butch Jones and Mike Bajakian. You don't hire someone from Butch Jones's staff without expecting them to bring some of that experience over.

For the most part I was not a fan of the passing game of Bajakian, mostly because I felt that it was far too conservative and didn't risk enough down the field. But it wasn't that UC never threw down the field, just that they didn't push vertical often enough. When they did the go to play was the deep crossing route.

Let’s take a look at the diagram of the play from the Belk Bowl. 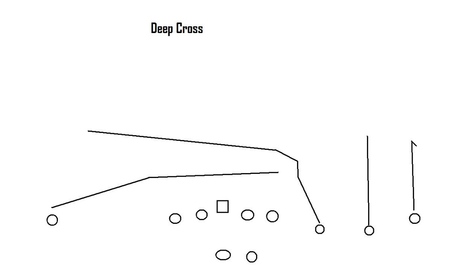 The deep cross is not the primary option on this play, that is Travis Kelce who is running an option route. But the cloud cover three that Duke is running negates that. The deep cross is always part of the play, but it is the second or third spot in the progression. Because it’s a long developing play, and the receiver needs time to cross the field to work open. The deep cross isn't a great route against man, but it is phenomenal against zones because the receiver is very hard to account for across the zones.