Share All sharing options for: Film Study | Hypervigilance and the Post/Wheel Combination

In the previous installment of Film Study I called some attention to the Bearcats use of the Wham block in the running game. Not so much because it was the be all, end all for the running game, but that it presents a host of new and exciting wrinkles.

UC already has a simple wrinkle off this look, one where the TE simply runs a release behind of the LOS to the flats. It has already become the Travis Kelce special. But there are bigger plays to be had by slightly adjusting the blocking.

The blocking adjustment was made against Virginia Tech, and the Bearcats ran the inverted veer a handful of times against the Hokies. But there was another wrinkle against the Hokies, but this one wasn't new. The Play Action wheel route. 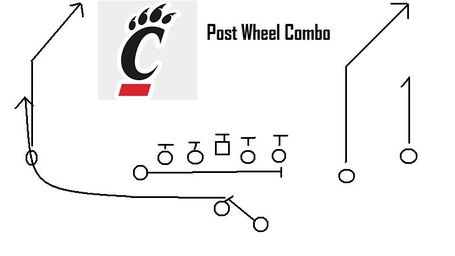 The key with any play action pass is making the blocking look identical to run plays. In a power based offense that is easy, you pull a guard in pass protection. Most defenses read guards, the old adage being that the guard will always take you to the ball. So if a linebacker reads his keys, seeing the guard rear up and pull is a dead giveaway for a run. That makes him susceptible to the play action pass.

While that is certainly true with a pro style offense, it is less so for the Bearcats. For UC there is only one blocking scheme in which the guard pulls, the counter, and it rarely pops for big gains, probably because it is the only time the Bearcats ever pull a guard, and is thus an extremely easy play to diagnose and defend; but that is a different story for another day. 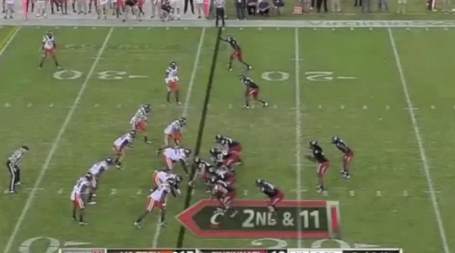 Pre Snap look. The things to pay attention to. 2nd and 11, pretty obvious passing down, but the Bearcats are in a run heavy look. Virginia Tech has no single high safety with 8 men in the box. That is a strong indication that Virginia Tech is in cover zero, man to man across the board. Thats the pre snap read, but the key is the safety Michael Cole who has dropped into the box. Cole could drop into coverage before the snap or at the snap, but Tech isn't positioned to play anything but cover three if they go zone. That's Munchies key, because his initial read is the smash combo on the top side. 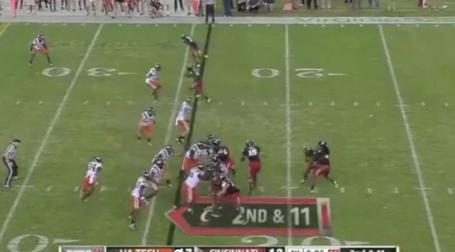 Man to man: Munchie starts his play action fake. The defense is clearly expecting run with 8 guys within three yards of the LOS. This is what Virginia Tech did all day, rolled 8 into the box and dared Munchie to make a play. 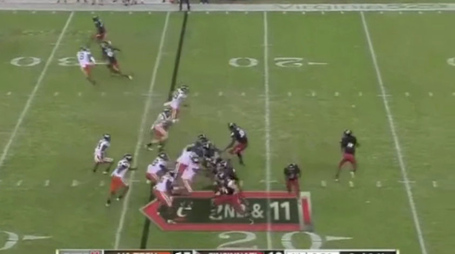 It is obviously a pass at this point, Munchie is still reading the smash front side, but the Hokies are still coming, effectively blitzing 8 guys. If Munchie looks to Ralph Abernathy IV now Virginia Tech will still have time to recover and prevent the play from being too big. But notice how no one is even bothering to look at the fastest guy on the field. 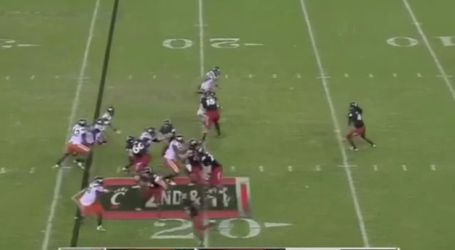 Munchie comes to his backside read. Someone for Virginia Tech has now noticed that Ralph Abernathy IV is going out for a pass, thats the bad news. The good news is that he has the athleticism of a baby hippo, and is trying to cover a cheetah. 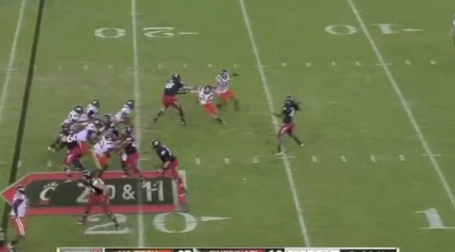 Munchie is ready to let fly, at the bottom left hand corner you can already see the blur that is RDA4 pass the poor defensive linemen who took it upon himself to cover Quattro. 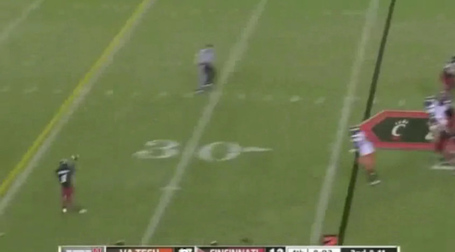 Catch and grass, lots and lots of grass. 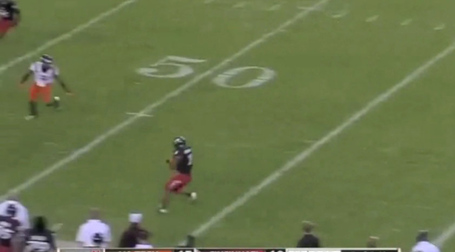 Poor Antone Exum. He was already having a rough day of it, but its about to get worse. He has no chance to make that one v one (literally) play in that much space. 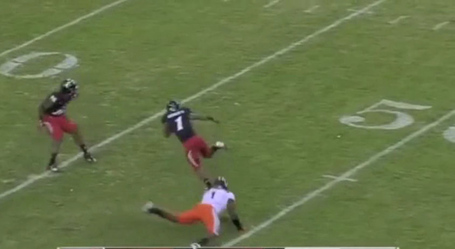 This was, obviously, a coverage bust. But Munchie Legaux had a lot to do with that. UC had ran the inverted veer a couple of times before this play, and was close to popping them for big chunks of yardage. If you watch the play from the endzone angle you can see just how consumed Virginia Tech was with not letting Munchie get loose with his feet. To the point where they let the most dangerous and explosive player on the Bearcats roster, a guy who is averaging 10 yards every time he touches it.

This was a big game, not just for Munchie but for the offense as well. Defensive Coordinators who, a week ago, would have thought nothing of throwing 8 men in the box to stop the run, blitzing 5 or 6 on every pass play daring Munchie to beat them with the pass now have to pause for concern. The one obvious weakness was Munchie, but its not that much of a weakness any more. Watching defenses try to adjust to the constantly evolving reality that is the Bearcats offense will be fun