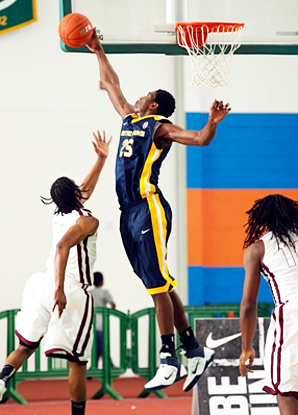 Mick Follow Down The Drive on Facebook/twitter and check out the store.

Cronin has a couple of scholarships left to play with for the class of 2012. Early signing day came and went and the Bearcats class of 2012 remained empty. UC only has a pair of scholarships on offer for this class, one each for the soon to be departing Dion Dixon and Yancy Gates. My best guess is that Cronin wants to go with a guard and a forward with a big being the most pressing need of the two.

Chris Obekpa has emerged as the big man target in this class for the Bearcats. Obekpa is from Nigeria and has been in the states for the past two years. He is exactly the kind of big man that Cronin loves because he is so athletic that he can cover a ton of ground and protect the rim. Earlier this season Obekpa notched an insane tripple double 20-15-11. That's 20 blocks, 15 rebounds and 11 points.

Little Mutombo is generally regarded as one of the 100 best prospects in the 2012 class. Some have him higher than others but he is a known quantity among colleges. His offer sheet includes UConn, Georgia Tech, Memphis, Providence, St. John's and Seton Hall. Most observes peg this as a Big East battle. He has already taken visits to Providence, St. John's and Connecticut. Obekpa will be on campus starting tomorrow through Friday with the Louisville game being the main draw. I fully expect a cascade of little mutombo chants from the student section. In the meantime enjoy a block party.