99 days from the kick off to the college football season means that it is about time to kick into high gear for previewing the 2013 Cincinnati Bearcats. The future shape of the offense has been discussed and predicted at length in this space, so it is time to our collective attentions to the defensive side of the ball.

While the offense is still a bit of a guessing game. After all there is only so much that can be inferred from starting deep into the coaching histories of those involved. Spring practice shed lights on some pieces of the puzzle, but the picture is still out of focus. Doubly so because there will be quite an adjustment period finding the sweet spot in the venn diagram of "things our players are good at" and "things we want to do." To those outside the immediate confines of the program the answer to the latter is a riddle, the former a bit mysterious.

However there is much less guessing on the defensive side of the ball. Art Kauffman has called plays before, unlike Eddie Gran. The defensive staff, with the exception of secondary coach Steve Clinkscale, are all imports from Lubbock. That is a departure from the offense, which has been cobbled together from some pretty disparate backgrounds.

The bottom line is that it is simpler to figure out what to expect on defense this year by simply watching games. With that in mind Down The Drive presents "The Texas Tech Defense; A Play In Three Acts. But this is not a classical play, this is some avant garde shit. The first act of this play is the end. (boom)

The Big 12, according to the popular narrative, is a conference of zero defense. Statistically speaking that isn't exactly true, context matters. On average Big 12 teams tend to give up more points than, say, Big 10 teams*. But, on average, Big 12 teams tend to score more points than Big 10 teams**. The context for the Big 12 is a simple one, there is not a greater collection of innovative offensive minds in the country than in the Big 12. The most notable innovation of the last five or so years, that of packaging multiple concepts into a single play went mainstream in the Big 12. It isn't really debatable that most of the Big 12 is perched on the cutting edge of offensive innovation. Even the most stolid and buttoned down team in the conference, Kansas State, throws out endless variations of the read option.

One of the most interesting offenses in the Big 12 is Baylor's. What makes them particularly interesting as an offense is the way that they adapt their offense weekly to what the defense is trying to do to them. Baylor is the only team in the offense heavy Big 12 to gain over 500 yards against Tech's defense, they were also the only team to top 600 yards in 2012. Texas Tech ended up with the 2nd best defense in the Big 12 on a yards per game basis, and the 3rd best defense on a yards per play basis, and Baylor shredded them.

The Bears came into the Red Raiders regular season finale fresh off their shocking upset of Kansas State. Texas Tech on the other hand was coming from a loss on the road in Stillwater to Oklahoma State, their third loss in four games. Baylor needed a win to clinch a bowl birth, Tech just needed a win period. What unfolded was one of the more under publicized and entertaining shootouts of the season. Here is the final box score, and the stats for the Bears. 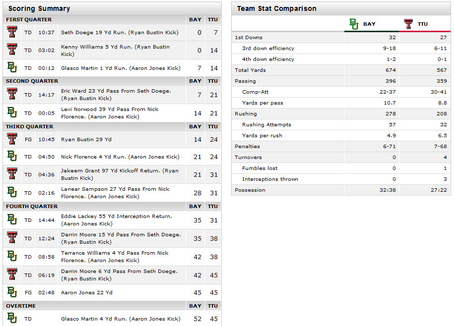 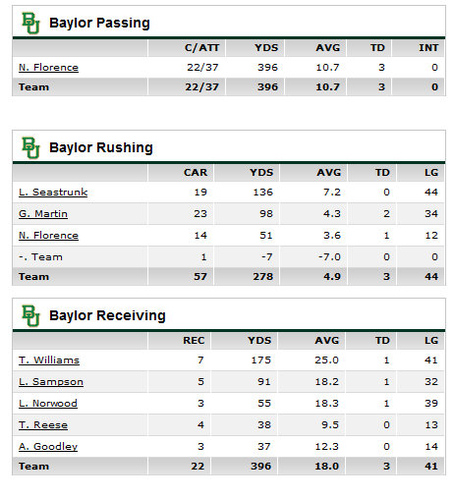 The box score would give the impression that the Baylor Bears took Art Kaufman's defense to school from the opening bell. Punishing a Tech defense that was frequently out of position. The game recap of record would do little to dissuade someone from that argument. But that isn't exactly what happened.

Texas Tech came into the Baylor game with a very specific idea. Do not get beat over the top. To do this they made a calculated bet that they could stop the Baylor running game with 6 men at the line of scrimmage. Doing so would enable the Raiders to keep two high safeties which, theoretically, would limit the big play production of one of the most efficient passers in the game, and his main weapon of destruction, Terrance Williams. It didn't turn out so great.

This is the breakdown of defense against the run and pass broken down by quarter. 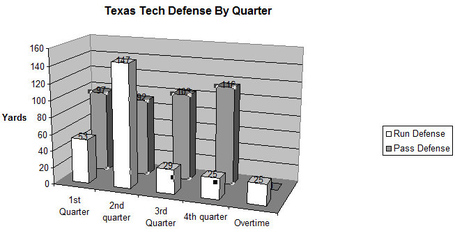 Without even looking at the video smart football fans could guess what happened in the 2nd half of this game. Tech brought a safety down into the box to contain Glasco Martin and Lache Seastrunk and the Bears running game, and they did. But that act ceded the initiative in the contest to the Baylor offense. The big plays started coming in bunches, and the lead that Tech had built thanks to solid offense and a special teams TD slowly but surely slipped away aided and abetted by turnovers.

Tech fielded an above average defense in 2012, and they probably maximized their talent in doing so. But the Baylor game is a fascinating one for me because I like to see how a team, and a coach, react when things don't go according to plan. For the most part Texas Tech did what they wanted to do defensively, the Baylor game stands as a glaring exception to the rule, and exceptions are always more fun.