The change from Munchie Legaux to Brendon Kay has wrought many adjustments to the Bearcats offense. For instance the run game when from being zone read heavy to there being hardly any zone read at all. But the most dramatic changes have come in the passing game which is taking place much further down field with Kay than it was with Munchie. One of the clearest ways to tell is that Eddie Gran even brought back a classic from the Kelly era, with a twist.

Share All sharing options for: Film Study; A Different Take On Four Verticals

Take his very basic approach to the passing game that's made a star out of every obscure passer who operates it. Aside from preparing his players so well -- of which the best evidence is his continued success at multiple, generally disadvantaged stops -- the one feature of Kelly's passing game that differentiates it from most others is its foundation in the concept of "vertical stems." It sounds more complicated than it is.

That was Chris Brown, the proprietor of Smart Football (and contributor to Grantland and SB Nation among others), writing about Brian Kelly and his offense back in November of 2009. That vertical approach passing game fueled what is, without much question or debate, the best passing season in UC's history.

As Brown discusses, and as I have written, the passing game of the Kelly era was built around the four verticals concept. It is a concept that every coordinator has in the playbook whats different is the usage. For most, four verts is the payoff, the punchline. For Kelly it was the setup.

Its still fresh in my mind, as it probably is in yours, but the statistics reinforce just how good the Bearcats were at throwing the ball in that season. The approach that opposing defenses took to stopping Pike and Collaros was to, in general, play with two high safeties. BK would respond by running the football, especially when Collaros took over. UC didn't run a lot, 27 attempts per game, but Jacob Ramsey and Isaiah Pead were very effective. The defense had to respond by bringing a safety down into the box, at which point BK would hit one deep, and the cycle would repeat. But everything started with four verts. It set up the entire offense.

Flash forward four seasons. Four verts is still in the gameplan, but the approach to using it is much more conventional with Eddie Gran and Darin Hinshaw. It is not the set up play anymore, it is the punchline. The Bearcats have run the concept a handful of times through the first two games. But the injury forced switch from Munchie to Brendon Kay has changed the Bearcats approach.

With Munchie the Bearcats resembled the best aspects of the Jones/Bajakian offense. There were liberal zone reads, QB power runs, even the inverted veer which I had been wanting to see for years. The passing game was built off those looks, which kept the 5 and 7 step drops to a minimum and got Munchie to make quick decisive decisions. Not all his decisions were great, and his mechanics were characteristically wonky, but the end product was noticeably better. And then he got injured, and the offense went back to the drawing board a bit.

The offense with Kay last week became more prototypically "pro-style," whatever that term does for you. Pulling guards, leading full backs, seven step drops. The works. One play in particular stands out to me from the Northwestern State game. 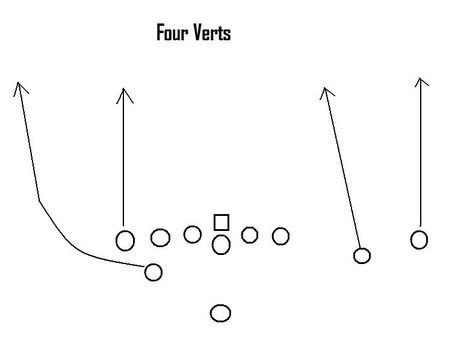 The diagram of the play. Lets take it frame by frame. 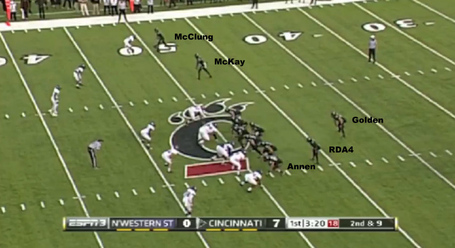 On the face of this is an odd formation for second and 9. Its an obvious passing down and yet the Bearcats show up with two backs and a tight end. NSU responds to the prompt exactly how UC wants them to, by rolling a safety into the box. They go one step further by having safety Chase Collins align head up on Blake Annen. If its a run NSU is in good shape. If. 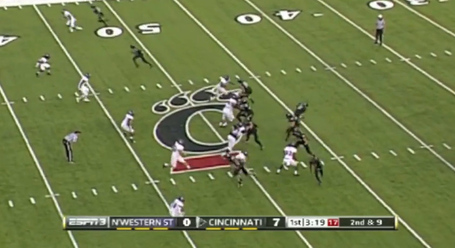 The backfield action says run, but the releases from RDA4 and Annen say otherwise. The play fake is still going on, but the damage it does is already clear. Cornerback Imoan Claiborne (bottom of the screen, standing on the 45) has a decision to make. There will quickly be two men running into his zone. Being a mortal, and thus unable to cover both, he has a decision to make 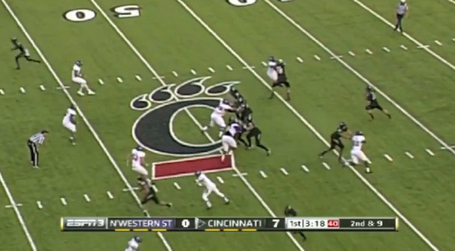 Claiborn has outside third responsibility in (what looks like) poorly run Cover 3. But there are two men in the outside third, Annen and RDA4. Of the two RDA4 is clearly the top priority so he bails to the numbers to take away Abernathy. The fact that he is in this spot goes back to the play design, but more on that later. 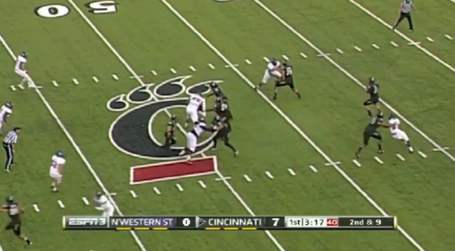 Annen, who abused Chase Collin's in his attempt to jam the big tight end at the line of scrimmage is running free into plenty of green space in the middle of the field. He is even giving Brenon Kay a little "hi, I am sort of open here" wave. 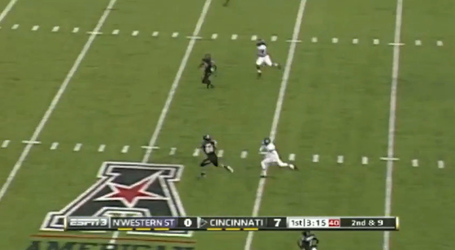 Annen catches the ball with a good three yards on Collins with Mekale McKay and RDA4 there as potential escorts to the end zone. 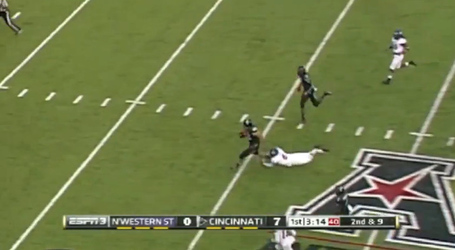 Collins lunges and gets enough of Annen to prevent him from strolling into the endzone unopposed. 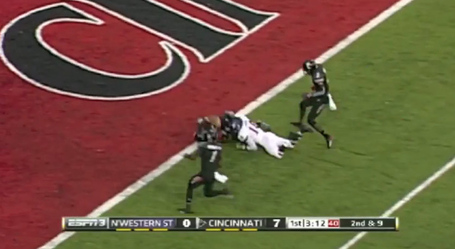 Claiborn comes over to tackle a stumbling Annen at the one. Hosey Williams punches it in two plays later.

Two things stand out to me about this play. First the formational alignment subverts the situational expectations. It is 2nd and 9, an obvious passing down, but the Bearcats come out with two backs and a tight end. This is clearly a designed call and not something that Kay audibled to at the line. Eddie Gran called this play based on how the Demons had played this look from UC in the first two drives. He got the exact look he wanted for this play and went for the jugular. Had Chase Collins not line up on the head of Blake Annen Kay probably checks to another play.

The other is the personnel, not so much the grouping but the deployment. Putting RDA4 in the fullback spot might seem like a simple thing, but it really messes with the responsibilities of the defense. The fullback is usually the domain of the linebackers, but he winds up being covered by a corner instead. That is the distorting effect RDA4 can have on a defense.

If the same play was run with Jared Golden and RDA4 flipping spots Claiborne would (probably) play it differently. He would probably sag in on Annen and leave Golden to the backers. Mind you at this point Golden already had a 40 yard catch to his name, but he doesn't present the threat that Abernathy does. Instead having RDA4 running at him Caliborne decides that Abernathy is the threat leaving Annen wide open in the center of the field.

Four verts is a great play against cover three in general (three men cannot cover four men), but the design of the play is what's interesting. Eddie Gran has a method of torture available to him in RDA4 that is really unique. He can pop up anywhere and the defense has to pay attention to him. The attention he draws will create openings for other guys going forward.

Battle For The Victory Bell Week