Titus Rubles had a rough go of it in his first year in the Queen City. He could never really find his lane as a Junior, and he tried to do things that were outside of his skill set, like shooting threes. He cut that stuff out of his game in 2013-14 and concentrated on what he did well, namely crashing the glass and getting to the rim. The Bearcats were better off for it.

Share All sharing options for: Titus Rubles Season In Review

The simply cutting out the three pointers from his game had a drastic, and dramatically positive effect on this play for the season on the offensive end. Last year Rubles launched a truly unconscionable amount of three pointers, 43 in total, of which he made 4, good for 9 percent. As a senior he took just only three shots from deep (making none) but was a + offensive player. His shooting wasn't drastically better this year, but his finishing near the rim certainly was. 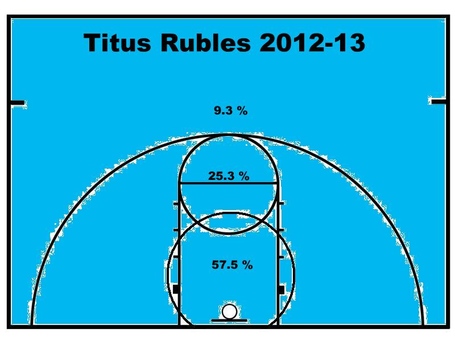 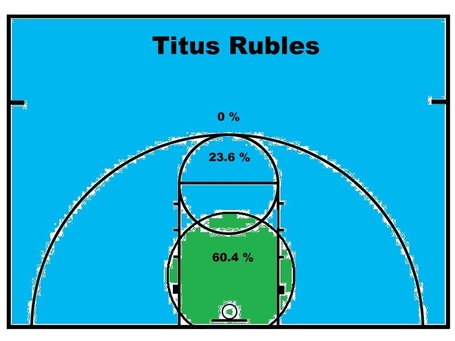 That shooting chart is still not a thing a beauty, but one does not have to be beautiful to be effective. Titus was a more effective player around this year than he was a year ago. Part of that is down to finishing through contact. Almost every player is going to see a jump in that department by simple virtue of having played more games. In Titus's case the JUCO league he played in while at Blinn Junior College in Texas did not come replete with the kind of rim protection that he saw as a Junior. This year he was more prepared for it.

There are two other things that were contributing factors to Titus's jump from below average to slightly above average offensive player. One was the free throw line. The rate at which Rubles drew fouls in the act of shooting went up. But the increase wasn't monumental, from 49.7 to 52.6, thats a statistically significant change, but creating scoring opportunities at the free throw line is only meaningful if they are converted. Thats another area where Rubles dramatically improved. He free throw shooting went up nearly 11 percentage points from 66 percent to 76.9. The other big improvement also took place at the free throw line, but in the run of play.

In general there weren't a ton of things that the Bearcats did that were effective on the offensive end. Justin Jackson post ups worked, Shaquille Thomas's mid range game sort of worked, Sean Kilpatrick's curl series worked, SK and JJ pick and rolls really worked, and Titus operating on the elbows worked and that is pretty much the list.

What was really fascinating about Titus being so effective working from the top of the key is that 15 feet is way outside his effective range. But he cobbled together a series of moves that worked for him. He has a little shot fake that did a surprisingly good* job creating space for a drive. He could drive left or right against bigger defenders, draw the help and dump it down to a big for an easy hoop. Against smaller defenders he could simply bull his way to the rim to either get fouled or finish at the rim. He was one of the three Bearcats capable of making an entry pass to JJ without making him move.(which should get him a virtual gold star considering how bad most of the team was at that) All told one of the best non SK or JJ things the Bearcats could do last year was get Titus the ball at the top of the key.

*even though a defense is begging for a Titus 15 footer

It must be noted that the strategy didn't always work. Smarter teams would play way off him, with his man playing with one foot in the paint at all times making it far easier to build a wall against drives from the rest of the team. That defensive tactic is one reason why the Bearcats spacing was such a nightmare this year. Mick could have stood him on the outside of the arc, but everyone knows that he is a non shooter. Titus had to make up for that in other ways, and he did that by crashing the glass. His improvement on the offensive end coupled with his always stellar defense is what made Rubles a quintessential glue guy.

When people talk about the Bearcats defense from this season the conversation always starts with Justin Jackson and his ability to switch 1 through 5 on that end. What goes overlooked is that the Bearcats had two guys who could switch 1 through 5 and still be effective. Titus was that other rangy and versatile guy. Consider this, just four AAC players ranked in the top 20 of the conference in blocks and steals per game. Shaq Goodwin is one, Maruks Kennedy is another, Justin Jackson is the third and Titus Rubles is the fourth.

Next years edition of the Bearcats will be a very good defensive team, if for no other reason than the impossibility of a Mick Cronin having a team that plays bad defense. But it will be a different kind of defense than next years team will play. They certainly won't switch every screen as they did this year because next year's front line bigs won't be able to play smaller. How many times did we see Titus switch onto a smaller primary ball handler and lock them up? A dozen? Two dozen? It seemed to happen a lot, and it won't be happening next year.

Titus Rubles played his best game in his last home game. There is something that warms the heart about that. He played 37 minutes scored a career high 24 points on 9 of 13 shooting, made all 6 of his free throws, grabbed 5 rebounds and played his customary lock down defense. That was peak Titus.