Share All sharing options for: The Amazing Disappearing Running Game

You don't have to be a very astute watcher of Football to notice the most damning trait of the offense in the last two games. It's not the lack of points, or the red zone production both of which have been bad the last two weeks. However those two areas are merely extensions of the bigger problem. The bigger problem is that the UC running game which was for an oh so brief stretch very daunting and threatening to defenses has all but dried up in the last two games against Syracuse and USF. 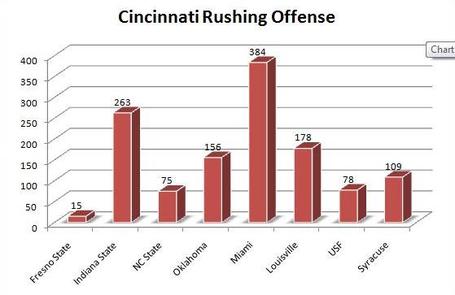 The totals from the last two games are the third and the fourth lowest totals of the year, and by far the lowest since the issues up front got sorted once and for all in the run up to the Oklahoma game. While it is true that Alex Hoffman did miss the Louisville and South Florida games with an injury, and that he is the best lineman on the team by some margin. However Sean Hooey started the Louisville game in Hoffman's stead and performed very well. I don't know the staff's criteria for grading offensive lineman, but based on what I saw Hooey was either the best or second best lineman in that Louisville game. Hooey was solid in the USF game again, so I don't think it is issues with the offensive line like in the beginning of the season where it seemed that no one got the scheme or was playing up to speed or playing out of position.

I am beginning to think that the issues with the running game are down to play calling. UC is a zone running team under Butch Jones. That isn't that big of a deal, almost all teams that run the ball out of spread sets are zone blocking teams up front. There are exceptions to that rule, for example Florida ran a lot of power and counter traps out of the gun when Tebow was the QB. However the base running play for a shot gun spread system will almost always be the zone run, be it inside or outside. For a quick primer on the differences between inside and outside zone plays read this. While it isn't essential for the larger point I intend to make, it is a good bit of information for a Football fan to have.

The basic bread and butter of the UC running game under Jones and Bajakian is the outside zone. The basic premise of the play is to string out the defense to the play side with the lateral flow of the offensive line. The RB aims at a point outside the tackle, or TE if he is lined up inline. If a hole presents itself to the running back in the process of hitting his aiming point he can take it up the field at such a point. It is all very elementary stuff, which is why this play is such a staple of the offense at this point. I don't find much fault in that. Isaiah Pead is an immensely talented back who is fast enough to hit a crease and explode for 80 yards in the blink of an eye. So a play that is expressly intended to get the back to the edge of the defense as quickly as possible is a good thing So far so good, no issues and no complaints from me. Yet.

Where the real issues lie is that there doesn't seem to be much of any other options in the running game from a play calling perspective. I am not sure if there just aren't many other plays in the playbook, unlikely, or that Bajakian is reticent to call them during game action, more likely. The most basic of all rules when designing an offense is that every play must have a counter. The outside zone has a natural compliment in the inside zone, the perfect play for when defenses flow too hard to the play side and open up cutback lanes on the backside of the play. It is right there, but I rarely if ever see it called by UC.

The USF game served up the perfect example of that. The Bulls were flowing hard to the play side every time. That completely shut down the outside zone and as a corollary the run offense in general. The issue is that this offense needs a threat of a run game to reach its full potential. I have discussed that point ad nauseum in the past, and I will not trouble you with a detailed explanation again. Suffice to say that the offense needs to have, if not a dominate running game, than at least an efficient one to operate at anything approaching maximum performance. In the USF game that outside zone play wasn't working. Mark Snyder and Co. game planned specifically to take that play away from the offense and Mike Bajakian didn't seem to have a response to that at all. The natural compliment to the outside zone is the inside zone but I don't think UC ran the inside zone more than three times all game. Instead they went to draws, counters and weird counter draw hybrids that I haven't seen before from this offense. Bajakian had a simple, elegant solution, the inside zone, to a basic problem, USF overloading to stop the outside zone, and he completely ignored that. That is kind of a big issue in my mind. I am not sure why the staff is so reluctant to call that inside zone play with Pead. Its not as if the guy has a hard time seeing and hitting the cutback lanes.

Skip to 3:30 for the play I intended you to see. I suck at this today. My larger point is that this type of run plays directly into the hands of Pead, a guy who has great short area burst and an ability to stop and start on a dime. The outside zone was completely shut down against USF. Syracuse saw the tape, and because they are professionals and apparently very good at their job they attacked the UC running game exactly the same way. Chazz Anderson was the leading UC rusher in that game not because he is the best runner on the team, but because Syracuse would rather have had him trying to beat them with his legs than Pead, because Pead can actually do just that. But there hasn't been much of an attempt to work that inside zone play from the coaches, which is at the very least confusing and possibly borderline unacceptable. If I can see the adjustments that opposing teams are making on UC's run game surely Butch Jones can too.

The great leap forward of spread offenses has come to an end. The next epoch of offensive innovation will come in fits and starts. Chris Brown made the compelling case that the guys who make subtle adjustments, the ones who tinker will really be the coaches that stand out. That is certainly true of Guz Malzahn's Scorched Earth Crew down on the plains and of Chip Kelly's 10,000 zone read variations out in Oregon. Whats frustrating to me from a fan perspective is that I kick back on Saturdays and I watch those two teams and see the subtlety of their schematic genius and think to myself that UC could be doing this. It's not that the offense hasn't been good, it has been good to very good at times. But as a fan I want more, and I can see more from this offense, and they have shown the capability to do more. Big changes aren't needed or necessary from the offense right now, the biggest thing that is needed from a staff perspective is more attention to detail. A little attention to detail would stop Isaiah Pead from running headlong into defenses that are stacked against that outside zone play, it would illuminate the path, it would show the staff that the inside zone play is there, it has been there all season, waiting to be exploited. But so far they haven't seen it, which is needless to say disappointing. But at this point all I can really hope for is for the Staff to do some self scouting on their own tendencies, which is a small step in the right direction.