The difference a year, or two, makes. For each of the last two seasons the River City Rivalry has been monumental on the Big East, and last year national landscape. Two years ago Pitt came into Nippert Stadium with a national ranking and a chance to cement a BCS birth in a game that amounted to a Big East Championship game as UC and Pitt finished 1-2 in the final standings. UC ran out to a 28-7 lead, let of the gas, let Pitt back into the game setting up a wild last play of the game, a Cal Stanford redux if you will. The end result a landmark win and a field run red, not with blood but with drunk and surely college kids. I should know, I was there.

Last year Pitt played perfect Football and was up 31-10, and then Mardy Gilyard got free at last, sparking a furious comeback and one of the most entertaining halves of Football I have seen, probably since the 2006 Rose Bowl, and one of the most insane  endings to a game ever, starting with a blown PAT opening the door for this to happen.

This years game is a far cry from the last two, even the last three really. While the 2007 game was no fun for me personally it was more relevant to every involved party than this game will be. All in all the interest in this game is way way down, which is a shame for what was becoming a hell of a rivalry. Pitt fans are wondering how it is that a team with a 2 game lead in the Big East at the start of November has managed to choke all of that away currently sitting 3rd, on the losing end of the tiebreakers with West Virginia and UConn. Meanwhile Bearcat Nation has turned their full attention to the surprisingly competent Basketball team rather than get into the specifics of what exactly has happened to this Football team.

The most accurate 14  word summation I can come up with for this Pitt team is thus. The Pitt Panthers are a deep and talented team that is coached by a moron. Last year Frank Cigneti Jr. and Phil Bennett were able to by and large withstand the cancerous effect of the Wanstache on last years Pitt team. This year? No such luck. This team scarcely resembles the team from last year. The running game isn't nearly as dominate, the offensive line has been a massive work in progress, particularly the interior of the line.

The defense remains among the elite in the conference. They can be exploited, particularly in the secondary. The secondary has been good on a statistical level. But they give up yards in bunches and have yet to face a really good passing game, which is something UC has. If the offensive line which has been bad as of late, even if it hasn't been disaster bad like it was at the start of the year, can give Collaros time UC has a distinct advantage. No one in the Panthers secondary can cover Armon Binns or D.J. Woods. If he has the time he can bomb away on the Panthers which will give UC a chance. If not UC will struggle becuase I don't see Isaiah Pead finding much space on the ground, particularly if the play calling is as stale and basic as it was against UConn.

Pitt is loaded with talent at the skill positions and has a young QB in Tino Sunseri who has had an ok season. That of course means that Mike Shannahan and Jon Baldwin will probably both go for over 100 yards with multiple scores and Sunseri will complete 110 per cent of all his passes and throw for 400 yards and multiple TD's. That's how bad the secondary is. UC can win this game, no doubt about it, but I don't expect them to. The cumulative effect that playing this many games with so few people is impossible to overcome this late in the season. I just want them to be competitive, winning the Paddle Wheel Trophy would be nice though. 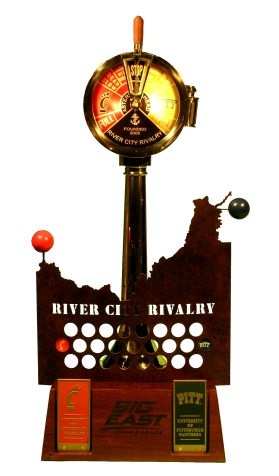