Jameel Poteat Commits To The Bearcats

Share All sharing options for: Jameel Poteat Commits To The Bearcats

Yup, best UC Football recruiting class in recent memory. Jameel Poteat a four star Running Back out of Bishop McDevitt Hihg School in Harrisburg PA committed to UC this afternoon about a week after officially decommitting from Pitt. UC was a close second or third when Poteat committed to Pitt in the summer. With the firing of Dave Wannstedt a couple of weeks ago, there have been mass defections from what was a pretty good recruiting class for the Panthers, ranked in the top 25 by all scouting services. Poteat was one of many Pitt commits to defect with the firing of the Stache, UC is in play for a couple of those guys with Deonte Gibson, Quinton Jefferson and Bill Belton being the most prominent of the bunch, but Poteat is the first one to pull the trigger and commit to the Bearcats.  More info and the requisite highlights after the jump. 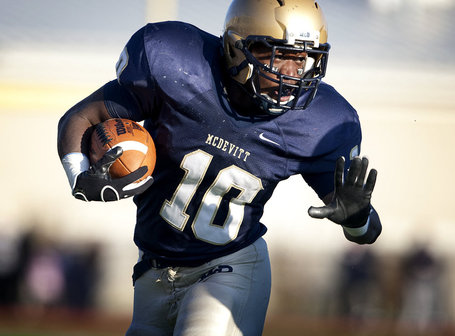