As of today there are 128 days until the Bearcats kick off the 2011 Football season at home against Austin Peay. For me that fact presents a unique problem? How the hell do I kill this much time. Basketball season is long over and I am already a quarter of the way through my Bearcat Retrospective series so I have a lot of days to kill. So, to bridge the gap I am going to do a "Better Know A Bearcat" series with the Football team. So without further ado lets kick this thing off with the Derek Wolfe edition. I must warn you that what follows is probably not what you would expect from this blog. But lets see how this goes.

Contrary to popular opinion Derek Wolfe does not hail from Lisbon, Ohio. That may be where he spent most of the past 20 or so years, but that is not his home. You see Derek Wolfe is immortal, not a scary Dawn of the Dead Immortal or anything. Just your standard every day Immortal like Teddy Rossevelt or Queen Victoria.

Wolfe is the son of Telamon and was raised on the lovely Mediterranean Island of Salamis. He is a little bit royal and was something of a spoiled little brat in his day. As such he was never picked on (I am sure that his immense size and strength had nothing to do with that, nothing at all I say). As a young man he did what most good Greeks did. He sailed across the Agean in a valiant attempt to see off those vain effeminate's from Asia Minor, the Trojans. Here he is bidding the sons of Troy a good morrow, never you mind about the man sized shield or the massive axe in his right hand. 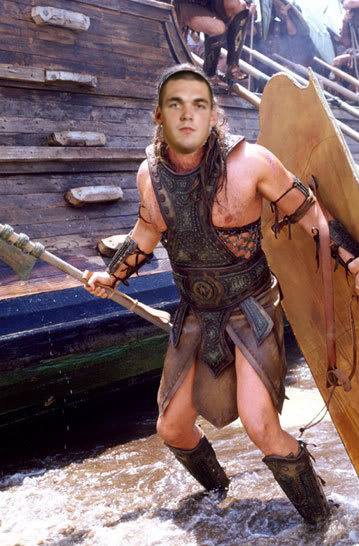 As you can see he was always possessed with great manners, perfectly cordial. He had some fun at Troy, he fought a little, he drank a little, he hunted small children for sport, he even had a couple of play dates with Prince Hector. A good time was had by all, but then his cousin had to go and kill the prince and ruin his sport. Young Derek got into a spot of bother with Odysseus after the war. They both laid claim to a prize and stated their case. The judges ruled in favor of Odysseus and young Derek fell on his sword and died. Meanwhile Odysseus commenced on a decades long journey that involved multiple multi-year extramarital affairs, whirlpools, sirens a cyclops and just generally visited death and destruction upon all. Let's call that a draw.

While the popular notion is that Wolfe died of his own hand, truth is he just went to summer for a couple millenia on Snake Island in the Black Sea. Eventually he came to America and decided that he would try this whole Football thing. Turns out he is quite good, just don't steal his shoulder pads, bad things tend to happen.