Butch Jones and staff have really been on a defensive kick lately. The 2012 class kicked off with a running back, Deionte Buckley back on the 11th of April. Since then the Bearcats have picked up two other verbals from DE/OLB Josh Posley from Warren Central High School and a LaSalle Lancer in the form Ryan Leahy who is a DE/DT hybrid at the college level. Now the Bearcats picked up the fourth member in the class of 2012 when Andre Jones jumped on board earlier today. 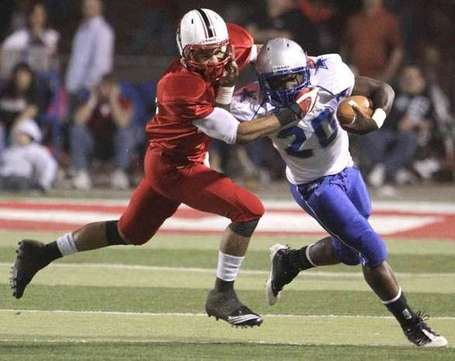 I must admit that I haven't seen a ton of Jones this past year. The main reason being that I lived in North Central Ohio during the Football season last year. As such attending "local" games on Friday Nights was somewhat problematic. That being said I have heard a lot of good things about Jones from people who's opinions I have come to trust. What I have heard is that Jones is the best DB prospect from Colerain since Eugene Clifford roamed the multi color turf on Cheviot Road. I am not sure that I am buying that just yet. Eugene Clifford was a scary good high school safety, the best I personally had seen since Michael Doss knocked skulls for the mythical 1998 Canton McKinnley team. Still, if that is the frame of reference for Jones it's not a bad spot to be. The Enquirer tabs him as the 10th best player in the area. Keep in mind that this is one of the best local classes in the last couple of years. All in all this is another solid pickup for Butch Jones.