Weekend Recruiting Round Up

Share All sharing options for: Weekend Recruiting Round Up

I mentioned that UC picked up a couple of commitments Saturday, well Friday and Saturday to be precise, when Andrew Smith and Akise Teague cast their respective lots with the Bearcats. Well it was a busy weekend for coach Butch Jones and his crew. There were quite a few prospects on campus for official visits. My instinct was that Teague and Smith wouldn't be alone. Turns out I was right as two more prospects out of the Peach State have committed to UC this weekend. Ralph David Abernathy IV a Quarkback out of Atlanta with fantastic speed and an impressive lineage, and Silverberry Mouhon a DE also out of the Atlanta area, Norcross to be specific. Abernathy chose UC over Ole Miss and Mouhon picked UC over Syracuse, isn't beating conference rivals for recruits fun?. More info and highlights after the jump. 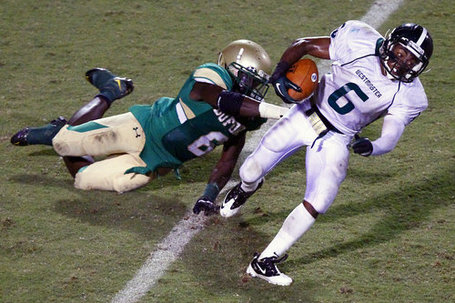 no embeddable videos that I could find, but there is this.