Yet Another Ben Pooler Update

Share All sharing options for: Yet Another Ben Pooler Update 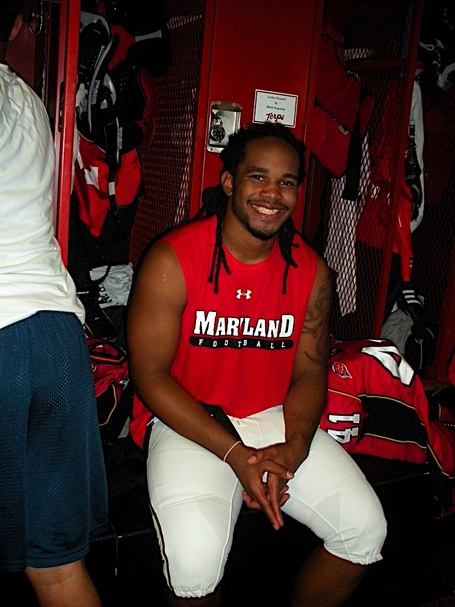 OK one of the benefits of blogging for a company like SB Nation is that all of the major bases are covered. I mean in the Big East every school but DePaul and Providence, they only sort of count, has a rep on the network at this point. The advantage of that kind of reach is that if something happens, like a transfer for insistence, there is always someone to turn to. I have put forth my thoughts on Pooler joining the program, I think it is a good move for all parties involved. Still, all I know about him is what his stats and bio say, which isn't a lot. So for a more complete picture I asked Ben Broman (best name ever nominee fo sho), the editor of Testudo Times his opinion on Pooler and his career with the Terps. Broman's opinion on offer after the jump.

Pooler is a guy whose absence kind of disappointed me. He's talented and his depth could've been used. The real problem he's had is that he's suffered two season-ending injuries in College Park. He injured his knee in his first game in his redshirt freshman year and was out the rest of that season. Last year, his junior season, he ended up injuring the other knee and was out for the entire year.

In-between those two years, he had one very solid sophomore campaign. He was basically a really good fourth linebacker who was forced into making four starts due to injuries. He would rotate in a lot and had a lot of versatility (he had played each LB spot at Maryland) before he became the temporary starter, and even then I was really impressed. He didn't get a ton of snaps, but he was third on the team in TFL and fourth in sacks. If he was starting the entire year, those numbers would probably be even higher.

As for the type of player he is, he's definitely an attacking linebacker. He was at his best when he was rushing the passer or stepping up to clog running lanes. When he dropped back in coverage, he tended to look a little lost. The one moment that sticks out to me is when Maryland lost to Duke that year (yeah, it was a bad season) and Pooler got stuck in zone coverage. He clearly had no idea what to do, and it ended up being a Duke TD. That tended to be the situation every time he dropped back, and it's probably been the biggest reason he's never become a starter. (Well, that and the injuries.)

But you could do a lot worse than him as a starter, and I still think he's great as a fourth 'backer, especially if you need someone to rush the passer who isn't entirely one-dimensional. He's strong, quick, and tough-nosed, which is a great combo for an attacking linebacker.

The question with him will be how much the injuries affected him. Is he still the same after suffering two season-ending knee injuries? It wouldn't surprise me if he'd lost a step. He wouldn't be the first. If he fully recovers, you'll have a pleasant surprise on your hands. If he doesn't, then there's no telling how much or little he'll contribute.