Share All sharing options for: Update on Ben Pooler 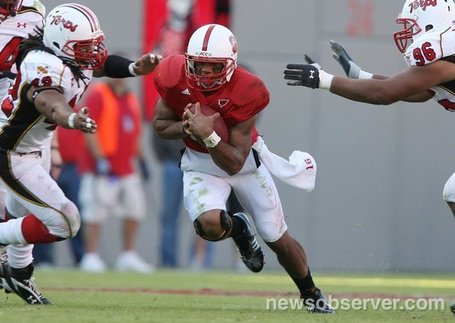 OK, so after the frenzy of last night the passage of time has brought a bit of clarity on the situation. Mainly because I have had time to actually look into Pooler, his play and his situation. Pooler was a three star recruit out of New Jersey back in 2007. UC was one of the schools that he was considering, but Maryland was his only offer so he pulled the trigger and became a Terp. At Maryland he had something of a injury plagued career at Maryland. Here is how his official University of Maryland bio reads.

When he could stay on the field he was obviously effective, but staying on the field was the problem. In late March it was announced that Pooler was leaving the Maryland program. Here is the statement from Randy Edsall on Pooler and his cohort Jamarr Robinson.

"I think what happens is, is everyone has five years to complete four years of eligibility but the fifth year is not a guaranteed year," Edsall said. "The thing the University of Maryland has done is they've lived up to their obligation of graduating those two young men in terms of their degrees, so they're going to be moving on and working to go, I think, to play at a lower level next year."

This is of course perfectly true, but rarely do you see it stated that bluntly.

Pooler has his degree in hand, presumably in American Studies. As such he is eligible to compete right away under the same rule that allowed Ben Mauk to transfer from Wake Forest without sitting out the requisite year.

So, the question to be asked why take a chance on an oft injured Linebacker from Maryland for this year? The reason is pretty simple. Ben Pooler is a very low risk proposition for the coaching staff. He was obviously productive at Maryland when healthy. With three major knee injuries there is no assumption what so ever that he can stay healthy for the Bearcats so if he can't do the job physically it is really no harm no foul. He will be on scholarship for the coming year and then he will exhaust his eligibility. At the absolute very least Pooler is another experienced guy at a position that was starved for bodies last year. Remember there were times last year where the linebackers couldn't even practice full go because there were four healthy linebackers on the entire team. There is of course the added bonus of Pooler as a practice player, another veteran voice in the ears of Nick Temple, Dwight Jackson and the rest of the young guns.

However in the event that this does work, assume for instance that Pooler comes in plays in every game and emerges as a productive back up and spot starter. J.K. Schaffer is done after this coming year, his eligibility will be exhausted and UC will have a linebacker core of Maalik Bomar, maybe Solomon Tentman and a ton of young and talented, but inexperienced Linebackers. Not ideal. But if Pooler works out this year, if he stays healthy and productive in his role that scenario changes. Go back and look at his year by year outcomes. He has missed three years to injury out of 4. This coming year will be his 5th. The standard for a Medical Hardship year is missing two years in injury, Ben Pooler exceeds it. So if Pooler is productive this year he could very well be brought back for a 6th year to bridge the gap between the outgoing generation of J.K and Maalik Bomar and the young guns like Tentman, Temple and Jackson. This entire situation is a very low risk, high reward scenario for the Bearcats.