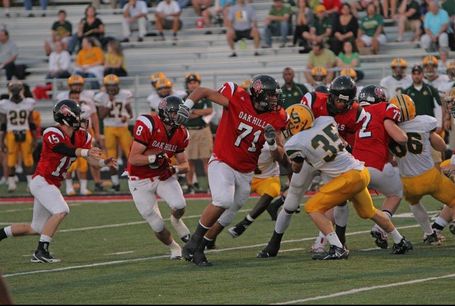 It is hard to get excited about linemen. In most cases only the true officianado's among us pay attention to what goes on in the trenches. The offensive and defensive lines are major areas of need for the Bearcats in this class and Butch Jones and co went after those positions hard.

Stacey is the best local offensive line recruit for the Bearcats in a long time. Stacey had several big time offers including Michigan, N.C. State, West Virginia, Boston College, Indiana and Illinois. He committed to Michigan in the spring before reversing field last week and committing to the Bearcats. Stacey will most likely wind up at guard in UC's system.

The fourth Warren Central Warrior to join the Bearcats Bond was an all Indiana first team selection on the offensive line and was a major factor in the Warriors ground game. Unlike most high school lineman who are heading to college Bond didn't play tackle this year. Instead he played guard which serves to give him some experience at guard, the spot he will play at UC.

Willaimson was a real force of nature this season for the Madeira Mustangs. Playing at a smaller school level than Leahy or Stacey Williamson dominated his competition. His team went undefeated in the regular season for the first time in school history and set records with their ground based attack. Kyle is a likely candidate to play guard for UC rather than tackle. Like all the linemen in this class he is bound for a red shirt.

Leahy is an interesting prospect. For most of his career he has played along the defensive line as a defensive end for the most part. This past season however he switched over the the offensive line and started playing at LT. I only saw one game, against Moeller, but I think that OT is where he winds up. He is still raw at that position, but his frame and athletic ability mean that he could be the LT of the future for the Bearcats. Don't rule out a stint on the defensive line. But I think Leahy has more potential on the offensive line.

When you look at Pace on film it's easy to see why he racked up 20 offers. The check list for a good defensive line recruit isn't that long. Does he get off the ball? Does he use his hands well? Does he beat one on one blocking? Pace gets three emphatic check marks from me. His get off is really incredible for a guy his size. Coupling that with his outstanding strength and its a scary package.