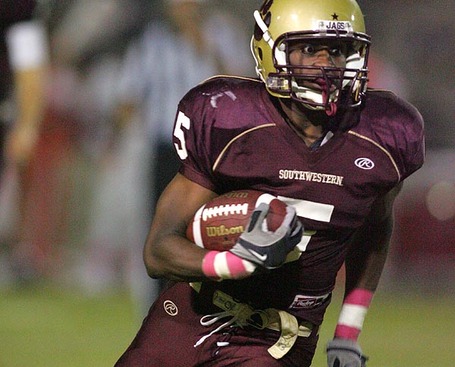 The Bearcats have just graduated the best back in school history in Isaiah Pead. Pead leaves immense shoes to fill with no upper classmen other than George Winn left to fill the void. Because of that it shouldn't be all that surprising that Butch Jones and his staff went after quite a few running backs in this class.

Harris brings a similar style to the game as Isaiah Pead. He is a one cut and go kind of a back. He doesn't do too much dancing in the hole. Harris can be a nightmare of a space player for the Bearcats, but not for the same reason's as Pead. Harris is a very powerful runner who is very hard to tackle in space.

Junior is a powerful runner who will play a hybird running back/H-back role that John Goebel and George Winn have played at times. Junior played as the B-Back in Middletown's flex bone offense which is a good basis for what he will be asked to do at UC once he comes off his greyshirt next January. Junior did play linebacker as well for the Middies, but I think he stays on offense at the H-back role.

Green is a tremendous back. Simply put. He has a great combination of size, speed and power. He is equally capable of running over defenders and simply sprinting right past them. Of all the backs in this class Green's ceiling might be the highest because he has such a phenomenal combination of speed and power. Green was a first team all state selection and named player of the year for the Central Florida.

Cole is the most advanced of the receivers in this class. A big reason why is that he is the son of a coach. He has been around the game for a long time and his father is one of the most respected figures in the Memphis area. Cole isn't a jaw dropping athlete but he is a very highly polished product who will be coming into a position that is traditionally one of the easiest for Freshmen to play. If a freshman is going to make an impact at receiver my guess would be Cole.

Alonzo is a bit of a throwback in this class. A big lanky wide receiver who has excellent ball skills and athletic ability. The problem for Alonzo might be that he played in such a run heavy scheme at Woodland Hills. The Wolverines run the option and don't tend to put the ball in the air all that much. I haven't been able to track down official stats for Alonzo, but I do know that he was the leading receiver for the past two years.

Graves is a guy who really flew under the radar in the recruiting process. He transferred from Garfield Heights to Maple Heights between his Junior and Senior seasons. Even though the schools are only separated by a few miles it might have contributed to Graves getting lost in the shuffle. Graves was part of another Mustangs team that made a deep run in the playoffs. It's hard to tell just how good Graves was in his senior season because the Mustangs didn't have great quarterback play. He plays the ball well in the air and has very good ball skills. Maple Heights used him a ton in the running game with Jet Sweeps and lining him up as a running back as well.