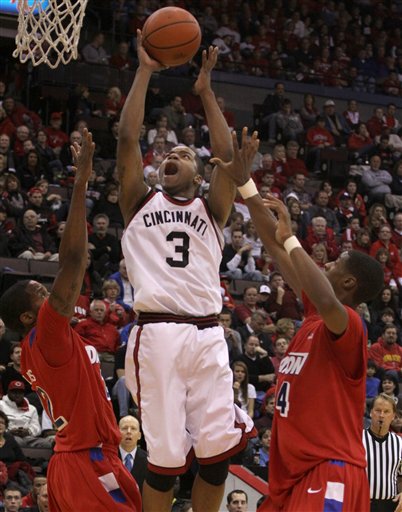 Technically I am supposed to do a post game recap within 24 hours of every Football and Basketball game. It is a clause of the agreement I signed to blog on SBNation. But it has been much, much longer than that and I have yet to write a word about the UConn or Dayton games, because I have no desire to dive back into the rabbit hole of depression that looking at the box score is sure to induce in the case of the former, and because I have been busy and shit in the case of the latter. But it is time to bring that streak to a close.

UC completely beat the hell out of the Dayton Flyers too within an inch of their collective lives. I highly doubt that any of the Dayton players have yet to remove the tire treads on their faces. UC played such a complete game that there is hardly any negativity to be had among Bearcats fans, an exceedingly rare thing during the Mick Cronin era. As much as I would love for every game this UC team played to wind up like this one, but that is very unlikely scenario. This game was an outlier in the truest sense of the word. There was a confluence of so many  "One Night Only" moments and stat lines.

Those things are all very rare and unlikely to happen in the course of a game again this year. So the idea of there being a massive carry over effect heading into Wednesdays game with Wright State is still a little bit beyond my grasp. That is not to say that there aren't things to take away from this game.

The only real thing that can be taken away in my estimation is the defense, and more specifically the defensive rotations. The rotations Saturday night were far and away the best that I have seen in the past couple of years, probably since the Andy Kennedy days or the long lost late Huggins era. The level of defensive intensity was something that I hadn't seen this year, even for stretches, so I had no expectations of that showing up Saturday night. It might have just been the gameplan to defense a team like Dayton that shoots a ton of jumpers, but I don't think so.

This is a team that is built to play this sort of defense, there are so many guys who are uber aggressive playing the passing lanes, like Darnell Wilks, Cashmere Wright and Sean Kilpatrick. You could even throw Justin Jackson into that category as well, though I just think that he is the type of kid that enjoys sticking his face in a fan to see what happens. Anyway. When a team has this many active defenders who are always full bore it can actually be a detriment to a defense that switches screens as ubiquitously as this team does. In the first few games this year UC gave up a ton of easy looks inside because someone would gamble up top and come up with naught but air and leave a large gap in the defense for the ball handler to exploit for an easy two. That didn't happen Saturday. The entire team played with aggressiveness, sure. But it wasn't defensive aggressiveness for the sake of of being aggressive. There was very much a controlled demolition feel to the proceedings. Where there are a ton of variables in play, but they always bring the building down precisely where they mean to.

The entire team was systematically destructive on the defensive end, and it was a sight to see. The Bearcats made sure that Dayton got the ball exactly where the Bearcats wanted to have it, shooting shots UC wanted them to shoot. They would cut off Daytons plays early in the clock, force the Flyers to fall back on their secondary options moving the ball along the arc, harried at every stop until the play would get deep into the shot clock where someone would wind up taking a highly contested 15 to 18 footer on the wings. Rinse and repeat.

Obviously UC is not going to enjoy this level of defensive production every night. It is an impossibility to hold every team they play to 20 per cent shooting from the field. But they don't really have to. The final number isn't what was most impressive to me. After all there is a difference between holding a team to a low percentage giving up open looks and giving 20 contesting every shot. I'll skip the latter because it is a lucky occurance. On the other hand trying to contest every shot maximizes a teams chances of winning. If UC can play that level and type of defense, where there are no gimmes and every shot is contested the Bearcats will be in every game they play this year. Thats what I took away from Saturday nights performance.