Share All sharing options for: Flipping The Kil Switch 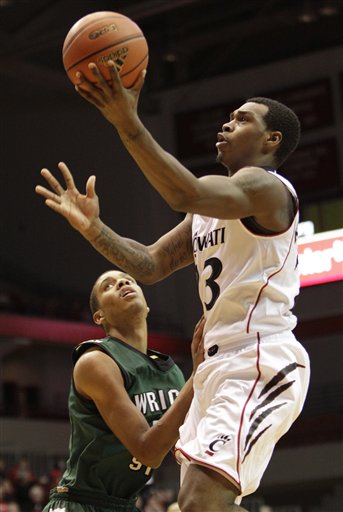 The UC Bearcats are off and running this year. Cincinnati is 7-0 for the first time since 2004-2005. Bill Koch would like you to think that this start is built on the shifting sands of a bad non conference schedule, primarily because he is a miserable little shit, though there is a hint of a point behind the cynicism. Anyways in 04-05 UC started the year on an 11 game run before falling to an Illinois team that was powered by Deron Williams and Dee Brown and came up short against North Carolina for the National Championship. That 04-05 team was also the last UC team to make the NCAA tournament. The best thing about this Bearcats team though is the way that they have won games, with great on ball defense and solid and balanced, if not spectacular offense.

The defense has been great, limiting opponents to 36 per cent shooting on the year, good for 15th in the country. Early in the year the defensive rotations were a little slow and not very sharp. As a result UC gave up open looks on jumpers and open passage into the lane setting up really easy buckets. Since the Dayton game the defense has been razor sharp. But none of this is really new. There are plenty of reasons to knock and discount the coaching ability of Mick Cronin, starting with his offense and ending with his time management. But the man known's how to coach a defense. The big change has come on offense and it centers largely around Sean Kilpatrick.

Last year UC was a perimeter team, almost exclusively. Lance Stephenson and Deonta Vaugh commanded so much attention and so much of the ball that the offense would stagnate with Vaughn and Stephenson passing the ball between themselves before one of them would isolate with 10 or 15 seconds left on the shot clock. UC went through what the Miami Heat are going through this year. You have two gifted perimeter players, both of them supremely talented offense forces that are willing and able passers. But both of them need the ball to be effective. The end result of this was that Stephenson and Vaughn would rotate possessions, one taking control, the other going and standing at the three point line, watching. As much as I loved Vaughn, and liked Stephenson, those two guys were supreme ball stoppers. Meanwhile Yancy Gates would call for the ball, be ignored, and have to concentrate on offensive rebounding, that was the only way he would get points.

This year the dynamic on offense is much, much better. There is more balance, more distribution and a real life inside outside thing happening. On the inside resides an interested, active and invigorated Yancy Gates, outside there are plenty of play making options, but the best to date has been Sean Kilpatrick. The difference that Kilpatrick has made to this offense is hard to overstate. He is a perfect compliment to Yancy Gates on the inside for one main reason. Kilpatrick is the rare scorer that does not require the ball in his hands to make plays. He makes things happen off the ball, makes good cuts to the basket, uses rub screens better than anyone who has recently donned the Red and Black and to top it all off he has a nasty little set shot three when he sets up in the corner.

There are other play makers on this team, Dion Dixon actually leads the team in scoring at 12 per, and Cashmere Wright can be devastating when he isn't trying to play the game at a pace that would make Usain Bolt comfortable. But the best two players offensively for UC are Yancy Gates and Sean Kilpatrick. This sport, and the Big East in particular so overwhelmingly guard centric, that for a team to have success they need to have perimeter players. UC has had perimeter players in the past, obviously. But since entering the Big East UC has not had a quality guard who can be very effective in multiple ways like Kilpatrick has been. When a teams best perimeter player gives up the ball so willingly and so freely it can open up an offense. While the sets that Mick Cronin likes to run will never be mistaken for cutting edge or dynamic offense, moving the ball quickly can have the same effect. Stephenson and Vaugh were the consummate ball stoppers. The ball would wind its way through the offense quickly until Vaughn or Stephenson received it, at which point everything stopped and the offense became 1 on 5. At this point UC has just one ball stopper that plays, Darnell Wilks, and he only gets 7 minutes a game.

At this point in the season, who UC plays is secondary. It is to me at least. All I am looking for is what this team does consistently and how they play. Knowing that is much more valuable than the win and loss record. Because UC has been here before, the cats have had good non conference records in recent years, but they have been achieved via means that didn't translate well at all to Big East play. The end result losing conference records and double digit finishes. But this team looks different, and it certainly feels different than past iterations of Bearcat Basketball. In the end will things change, who knows? But at this point I think that the little bit of dynamism that Sean Kilpatrick has brought to the team will make a difference come conference season.