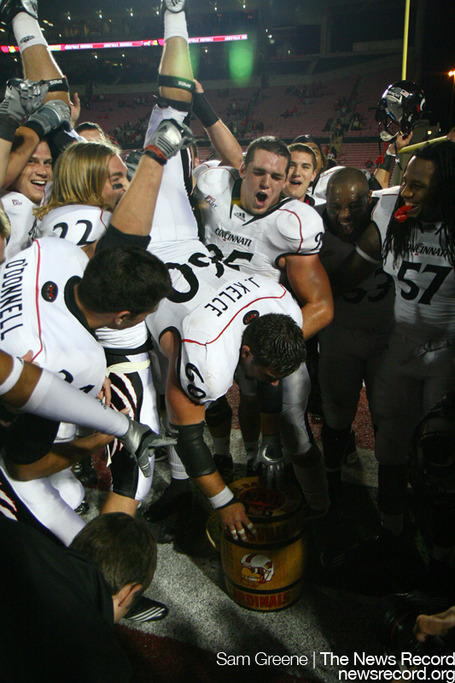 With these five points the Cincinnati Bearcats lock up the world, or at the very least the Keg of Nails which, despite being empty is at least as valuable as the world

As I have told anyone and everyone who has asked, and a fair few that haven't, the offensive line is the surprise of the season in my mind. 6 total stats allowed, good for 24th nationally, allowing a sack on just 4 per cent of pass attempts which is very good. But the challenge from Louisville will be a notch or two above those provided by Miami, N.C. State and Akron. Charlie Strong is a zone blitz aficionado and will challenge UC's blocking schemes with some exotic looking blitzes. I fully expect Strong to blitz early and often to stop the Isaiah Pead and the running game. Last year UC held up very well against the pressure, but this is still a new year with two new starters that are bound to be tested by Strong's schemes. Keep in mind that this group has faced a similar scheme in Tennessee and by and large handled it well. Still this will be a real pressure point for the offense and it is something worth keeping an eye on tomorrow.

Collaros is coming of his worst game of the season against Miami. The baseline numbers weren't terrible 251 yards passing, 340 yards in total with a TD. But he completed just 53.3 per cent of his passes, threw 2 picks, fumbled once and posted his lowest QB rating of the year, 121.28. In general against Miami he fell back into last seasons trap of trying to do too much and he forced a lot of bad throws. I will admit that his receivers did him no favors in the Miami game. But Zach still has a tendency to go for the spectacular when the merely good can win the game.

This is becoming something of a theme but McClung also had his worst performance of 2011 against Miami. He was by far the most targeted receiver in the Miami game with 11, but he only caught 6 of them. Worst of all the normally sure handed receiver that I have taken to calling McClutch for his knack for making big plays at key moments of drives dropped three balls. One of which would have been a first down, and another of which would have been a TD early in the game. McClutch gets the ultimate shot at a redemption song tomorrow. Louisville has a pair of safeties in Shenard Holton and Hakeem Smith that I really like. But the same pairing got eaten alive by T.Y. Hilton. A player who has nearly identical dimensions as McClung, but slightly more speed. The combination of UC's offense with Louisville's approach to defense, particularly pass defense, means that the chance is there for someone to have an Armon Binns like afternoon. My bet is on McClung.

The UC front has to stress contain this week (and next week as well) rather than all out pressure. This is a point that was made by Paul Dehner, and is well taken. The thing that I am going to watch is how Derek Wolfe and John Hughes push the pocket. Teddy Bridgewater is immensely talented, but he likes to escape to the outside of the pocket rather than up the middle. If Wolfe and Hughes (and Stepp and Beard) collapse the pocket and Walt and Dan Giordano (and Mills and Taylor) rush under control UC can suppress Teddy's rushing lanes. And lets be honest, Louisville's offensive line is going to be over matched at every position but Center. Also keep in mind that schemes like the Cardinals are made for the Joker Package.

I have taken a vacation in terms of complaining about the safety play since the Tennessee game. Primarily because since that game the safety play has gotten better, much better. And as an added bonus the approach to the game that Tim Banks and John Jancek develop is much more commiserate to the skill set and talent levels of the players on hand. But there have still be bust brought on by mental errors that have to be cleaned up. I don't think that Louisville posses a great threat to the UC defense because I don't think they can get the big plays they need running their base stuff. But they can get them when plays break down because Bridgewater is athletic enough to get out of bad situations and make things happen. Drew Frey in particular, and Wesley Richardson as well, have long and well documented history of chasing rainbows in the backfield while receivers race past them headed for the endzone. As Chris Speilman loves to say you have to stay deep as the deepest. Giving up those kind of big momentum changing plays is an absolute no-no in a rivalry game like this one,