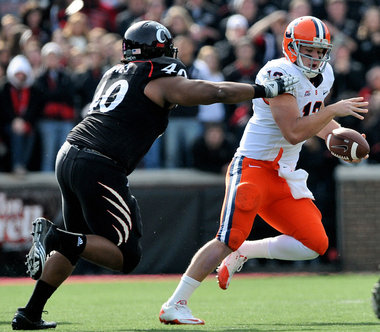 One thing that you will continually hear me talking about in the run up to the season is that it is important to pay attention to the trends within the trend. I mentioned that in the offensive line preview in the context that the offensive line was actually pretty good down the stretch last year.

I am going to implore you to do the same when thinking of the defensive line. Early in the year UC's defensive line was doing a great job shutting down opposing rushing attacks. But as the year ground on the run defense began to get more and more porous. The single biggest reason for this late season rush defense collapse was a general lack of depth. There were just 6 Defensive Linemen that played in 10 or more games last year. Steve Strippling didn't really have the luxury of a two deep last year. In fact I am pretty sure that he spent every knight kneeling beside his bed praying that no one ever got hurt. Part of last years problem, in fact most of last years problems on the defensive line can be traced to the infamous class of 2009 and its industrial scale washout rate. Most of the guys from that class were destined for the defensive line and linebacker positions that were paper thin last season. The depth is much better this year and a position move from a three year starter should pay big dividends.

Walt is finally coming home. After two years as a linebacker, one in the 3-4 where he was a perfect fit, and one in the 4-3 where he was a less than perfect fit Walt is back where he belongs and he couldn't seem happier about it. The simple fact of the matter is that Walt was the best pass rusher on the team last year forced by a chronic lack of depth to play out of postion at outside linebacker. He is up to close to 250 pounds and should be a a major boon to the pass rush.

Hughes had a low key great year in his first year as a starter registering 47 tackles and 4.5 tackles for loss. Like everyone else on the defense he was in a constant battle against injuries and he logged a ton of snaps. It's a shame that UC doesn't track that snap because Hughes and Wolfe would almost certainly be in the top 3. I would like to see him become a little more engaged in the pass rush this year because he should have plenty of one on one chances because of the guy next to him. Plenty of buzz around Hughes right now.

Wolfe has started his last 25 straight games and is by far the most experienced of the defensive linemen. Last year marked a transition from being the nose in 3-4 scheme to being the DT in a 4-3 scheme. I thought that would mean a bigger increase in production. He battled some injuries last year as well be he was a rock playing something like 75 snaps a game. Wolfe has an NFL future and could play his way into the second round if he produces and stays healthy.

Giordano had a decent year as a first year starter. He finished the year 2nd on the team in sacks with 4.5 and third in tackles for loss with 8. I anticipate him staying locked on as the strong side defensive end with Walt playing on the weak side. Giordano plays the run very well. If there is something to work on for me it would be keeping his aggression in check. At times he would overrun plays last year.

Mills is an interesting case study. On paper he led the team in Sacks and Tackles for Loss last year. But I don't he was as good as the numbers indicate. At 5'9" 235 pounds I can't imagine there being a smaller starting defensive lineman in any BCS conference and any OC with half a brain ran straight at him, to generally stellar results. He simply couldn't hold up against the run. You also have to keep in mind that the majority of stats Mills racked up came against a Rutgers offensive line that was one of the worst of the decade. A lot of pre season magazines have him listed as a starter, but there just is no way that happens. He will be much more effective as a situational pass rusher/havoc wrecker than as an every down player. I think last year proved that.

The only backup at both defensive tackles spots last year Stepp had a good year as a reserve registering 20 tackles, 3.5 tackles for loss and recovering a fumble. Another year in the weight room has done him good as he is up over 270 pounds.

The staff managed to suppress the urge to burn his red shirt last year. Beard is 6'5" 273 pounds with the versatility and athleticism to play either end or tackle. I would argue that Beard has the highest ceiling of any defensive lineman on the roster because of his athleticism and ability to play both line positions. It is his red shirt freshman season but I anticipate Beard being a fixture in the rotation and he could even make a play for Dan Giordano's Strong Side DE job.

The Colombian born Miami bred defensive tackle is someone that the coaches were raving about in the pre season. It was expected that he would burn his red shirt and join the rotation at DT but that didn't quite happen. Though he did play in 5 games over the course of the year.

Harrah is another red shirt freshman who was by all accounts very impressive in the spring. He is 6'5" and weighs a touch over 250 pounds. He is listed in some pre season magazines as a DE but I think ultimately he will move inside to defensive tackle.

A Senior Taylor was a primary backup at DE last year. He played in 10 games registering 7 tackles, 2 TFL's and 1 sack. Taylor should be the backup at Strong Side DE this year.

Trigg is a guy who had a promising start to his UC career but a combination of injuries and bad timing have by and large kept him from making his mark at defensive end.

A former walk on who has played in 9 career games.

Walk on from Highlands High School. Has yet to appear in a game for the Bearcats.

DE from Norcross in the Atlanta area. Seems well coached and could contribute this year on special teams

A DE from Miami Central. Has plenty of athleticism but is on the light side at just 215 pounds. Will take his red shirt this year.

Power house player from Withrow. Has a slight chance to contribute in 2011. More here.

A technically sound and well coached player. He doesn't have jaw dropping athleticism and will need a couple of years in the weight room. Has the frame to pack on pounds and move inside to defensive tackle.

Yes, I am well aware that this is the highest ranking of any so far, and given the defense's other problems it is likely to be the highest of them all. Moving Walt to DE is going to have a hugely positive effect for this unit as a whole. It is going to free up Wolfe and Hughes from constant double teams and give Dan Giordano chances to get some one on one match ups. Beyond that there is legitimate depth here. Not hopeful "if this, this and this happen it should be OK" depth but actual depth. There is strong upper class leadership with Wolfe, Hughes and Stewart and a slew of young talented guys filling out the ranks. This should be the best D Line UC has fielded since the 2008 group of Nelms, Barwin, Byrd and Hopple.