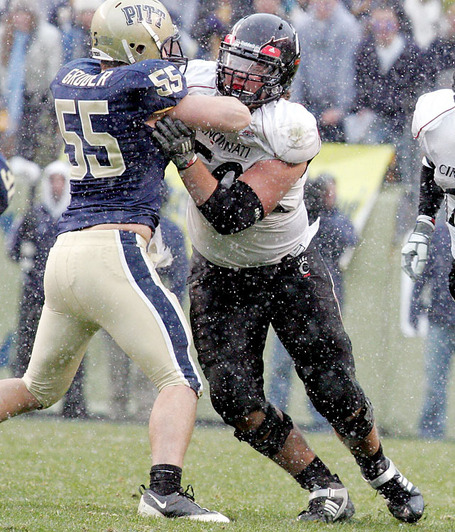 If there was one thing last year that set back an offense that was generally the best in the conference it was the offensive line. One year after the fielding what was probably the best Offensive Line in the last decade for UC the whole group seemingly went over the cliff. TFL's allowed went from 68 to 80, sacks allowed went from 15 to 33. That's the general trend and it's not particularly encouraging I will gladly concede that point. But when doing this sort of analysis it is often the trend within the trend that gets overlooked. Last year the problems started with a couple of massive misevaluations of the talent on hand. Don Mahoney for reasons I will never understand decided that C.J. Cobb, a guy who was moved to guard almost the instant Brian Kelly got the job, would be fine to take over the RT job vacated when Sam Griffin moved to LT to replace Jeff Linkenbach. He wasn't. The other big issue was Evan Davis starting at all. He was a center but couldn't perform in camp and Jason Kelce replaced him. Don Mahoney thought he would be fine at guard. He wasn't.

Those mistakes were rectified almost immediately. Evan Davis was replaced with Randy Martinez for the Indiana State game and Martinez reeled off 11 straight starts to finish the year. Martinez wasn't a standout, but he didn't get obliterated every snap. However the C.J. Cobb experiment was allowed to continue unabated for two more weeks. "Why" you may ask? "I have no idea" would be my response. By the time that Alex Hoffman and Cobb switched places on the right side the damage was done. At that point UC had by far the worst line in country. They gave up 15 sacks in three games or exactly as many sacks as allowed in all of 2009. But moving Hoffman to tackle stabilized the unit and enabled the offense to finally produce at a level near what we had been accustomed to. Average total offense in the first three games 337, average after the Hoffman move? 443. This is all just a way to say that while the offensive line stats are terrible for the year. The group as whole was much better down the stretch than people recognize. That should leave UC in pretty good shape up front this year.

Ripped. Drew his first start of his career in the Louisville game when Alex Hoffman went down with an injury. He was spectacular against the most sack happy defense in the conference and completely shut out Rodney Gnat who at that point in the season was the best DE in the conference. He started the USF game to similarly rave reviews, from me at least. I was convinced that Hooey would be the RT starter for the rest of the year. Instead he went to the bench and Cobb remained a starter. Still the most baffling personnel decision of last year for me. That could be trumped though. While I have Hooey at LT word is that Don Mahoney is going to be moving Alex Hoffman to LT this year. I already have the post for that moment ripping Mahoney for making another massively bad evaluation saved in my head.

As detailed above he started the 11 games of the year and played in all 12. I thought he was an excellent lineman last year and a massive upgrade over Evan Davis at LG. He did have some struggles last year, Kendal Reyes chief among them. But he should be a solid starter in this his final season.

I am not particularly excited at the prospect of Davis being given another go as a starter. Last year he just was not ready physically for the speed of play and the general physicality at this level. The hope is that another year in the weight room would get him ready to go. I have my doubts but I am fine with him getting another go at it.

Yes, it is Digger's little brother. Austen has a bright future and I have heard good things about him through spring and summer. While he hasn't technically won the job over Andre Cureton I think he is the odds on favorite. He is up to 280 or 290 now over the 260 something he carried when he stepped on campus. As a first year starter he will have his foibles but he has the looks of a 40 start career to me.

The best lineman on the team, though Hooey has a much higher ceiling. Hoffman is not a natural tackle, he is more of a guard. But the line needed some stability on the edge and he provided it last year. I don't see any reason why he won't be an all Big East performer again this year.

Cureton has rounded nicely into shape. Since stepping onto campus he has lost about 50 pounds. He is still in competition with Bujnoch for that RG spot, but I don't think he wins the position. He should become a solid back up at both guard spots.

A senior that doesn't have a ton of game experience. Phil Steele has him as the backup to Davis at Center.

Red shirt freshman should be the back up to Alex Hoffman at RT. Absolutely dripping with potential he should be a fixture in the rotation. Can play either tackle position and probably center as well. I would not be the least bit surprised to see him have a great camp and win a starting job at one of those three spots.

Not an elf. A former grey shirt and I think preferred walk on as well. He was a high school TE making the long transition to being a tackle. Probably a year or two away.

Redshirted last year. Was projected as a DL by the recruiting services should. Might be destined for a spot in the guard rotation.

Moved to OL from defense in spring. Not entirely sure if he is a guard or a tackle.

Is my projected backup at center. Of the reserves I think he has the best chance to move into the rotation if for no other reason than to give Evan Davis a push at the position.

This is a guy that Brian Kelly perused very hard. He eventually went to Ohio State. He transferred in the spring. Obviously he has to sit out a year but he is probably one of the 5 best lineman on the team right now and would start somewhere if he could play.

In many respects he is the second coming of Sean Hooey. He has very similar dimensions. Will take a red shirt this year but I suspect he will be a rotation player at tackle starting in 2012

The only guard or center among the incoming players. He played tackle in high school but will make the transition inside in college. I have a hunch that he is going to impress when the pads come out.

The smallest lineman on the team. Will need several years in the weight room before he is ready to contribute.

Still a ton of uncertainty. I don't doubt that there is enough raw talent on hand to craft a solid 8 man offensive line rotation. For me the talent is there. But I have very little faith in Mahoney's ability to put his best five on the field at the same time, and put them in a position to succeed. The rumors that Hoffman is moving to LT underlines the point. I am not disparaging Hoffman. I think that he is a fabulously talented lineman, but he is guard and he will have a pretty good career in the NFL playing as a guard. Hooey has the highest ceiling of any of the Lineman and at 6'9" 300 pounds with a wing span that rivals an albatross he is a prototypical LT, not just for this level, but for the NFL as well. So why not stick him at LT? You do that and Hooey starts the last 26 (hopeful, I know) games of his career and don't have to worry about the most important position among the lineman. That switch if it happens is just tremendously short sighted in my opinion. The 6 rating is basically a one point deduction in anticipation of whatever misevaluation Mahoney will eventually make. On talent alone this group is probably a 7.