Film Study: Looking Once More At The Zone Read

Share All sharing options for: Film Study: Looking Once More At The Zone Read 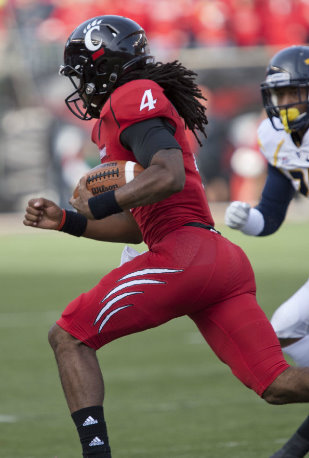 Without a doubt the biggest question around the Big East this week is what the University of Cincinnati do without Zach Collaros calling the shots under center. Much of the talk this week has centered on the change to the style of the offense. Will Butch Jones and Mike Bajakian get conservative? Will Jones completely re work the offense to fit the skills of Munchie Legaux. The answer to the first question is no, not really at least. Consider this; Bajakian let Munchie put the ball up on 21 of 40 snaps, and crazy as it sounds that is a higher rate of passing attempts than average. The 2011 Bearcats have been 55 per cent run on the season.

The answer to the second question is somewhat controversial. Zach Collaros, born leader, heart and soul of the team is actually a square peg in the round hole of the Butch Jones system. What Jones really needs in a QB is a guy who is capable of standing in the pocket, survey defenses, and make throws into tight windows. Additionally he has to be a willing runner of the Football. Truth be told, Zach is neither of those things, OK he is definitely one of those things. The running he has down pat. But his effectiveness as a passer from the pocket is much less than outside of it. The coaching staff has been trying for two years to figure out how to make the offense work with Zach. And while by and large it has worked, it is still a very imperfect marriage. The hard truth is that Munchie's skill set is a perfect fit for this offense.

Legaux stands 6'5" so he is perfectly able to stand in the pocket and deliver passes, his arm strength is better than Zach's, he isn't as accurate as Collaros, particularly on the move. But the most important difference, from my perspective at least, is that Munchie is a much better athlete than Zach is. Way back in the day I said that Munchie reminded me of former Oregon QB Dennis Dixon and I stand by that. But that is slightly off topic. The topic of the day is the running game.

When I was watching the game live I noticed that Legaux was much more apt to pull the ball on a zone play than Collaros has been this year. But I thought it might have just been a figment of my imagination. I will admit fully to having a tendency to see things happen in games that upon further review didn't happen at all. But on this one I am right.

The theoretical impetus behind the zone read and its development is that defenses always have a numerical advantage over the offense because the defense doesn't have to account for the quarterback on running plays. Offenses need to account for that extra defender somehow, particularly for spread teams. The prevailing wisdom is to account for that extra defender by reading him. If he stays home give to the RB, if he crashes after the RB pull it. But for most of this year UC has been forgoing the read part of the zone read. If you cue up tape of the Bearcats running game this season (here are Isaiah Pead's runs from Tennessee and N.C. State) pay close attention to the backside end. It looks like UC took to read out of the zone read this season. Running plays seem to be designed to go to either a running back or the QB with no reading involved.

This is pure, 100 per cent speculation, but I think that a lack of reads in the running game might have something to do with Isaiah Pead's second half struggles. Just look at the first half, second half splits for Pead. Nearly 250 more yards, more TD's and more big plays in the first half. My suspicion is that teams this year have been game planning to stop the zone read with scrape exchanges, and other techniques that muddy the read for the QB. Only to discover that there is no read and it is either a straight hand off to Pead or a designed run for Collaros, the later of which is very easy to predict based on situation and personnel groupings. For example with Zach anytime UC had a third and short with two TE personnel it was always a QB run, and it never worked.

What I suspect is that down the stretch of the season with Munchie as the QB the Zone Read will become the base of the offense. I feel this is a reasonable assertion because this is what UC went to in the running game during the second half of the West Virginia game, and it was very effective. Check out the 65 yard gash against West Virginia.

Normally I do the old frame by frame breakdown of the play. But it's not really necessary here. The only thing you really need to pay attention to with this is the mesh between Isaiah Pead and Munchie. Here it is from the top. 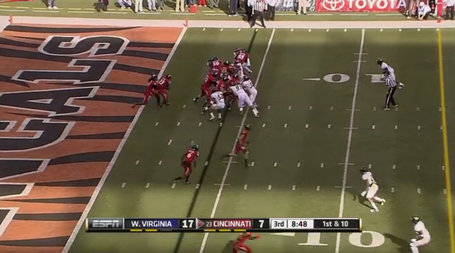 Do you see how far inside Najae Goode is? That is an automatic pull for the QB every single time. Its even more obvious from the field level. 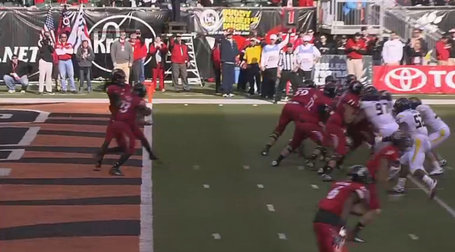 Munchie knows the moment that he begins that ride that he is going to pull it, but watch how long he holds the ride. 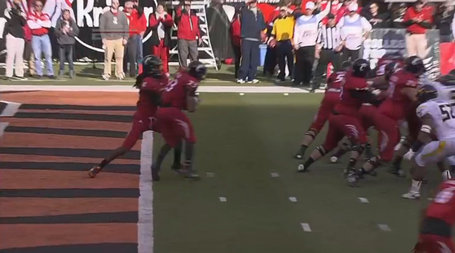 That extra half a second leaves good completely flat footed so that when Munchie does finally pull it he has no chance to make a play and as the first screen cap shows there is absolutely no one in the middle of the field. 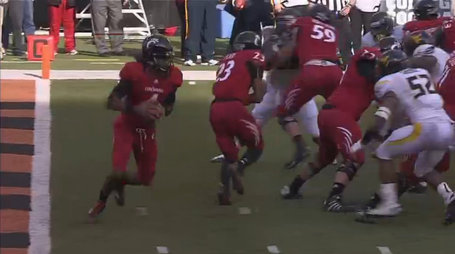 This play really put the West Virginia defense on edge for the remainder of the game. Take a look at Isaiah Pead's second touchdown of the game Staurday and again pay attention to the the backside of the play and how much respect the defense gives to Munchies running ability.

I fully expect to see the same base offense against Rutgers that Jones and co drew up at halftime of the West Virginia game. But with a week to add some wrinkles and refine techniques it should be even more potent, which is saying something. The Munchie led Bearcats put 214 yards of total offense on the board against West Virginia, 100 yards of which came rushing the Football. UC is a balanced offense, has been all season long, and I don't expect UC to baton down the hatches and play a really conservative offense with Munchie. But I do expect UC to run a lot because that's what the offensive line is good at, oh and Isaiah Pead is exceptional and Munchie is pretty athletic to and finally I expect UC to run because Rutgers is terrible against the run. The Scarlet Knights have given up 200+ rushing yards in 3 straight games. Butch Jones is a smart guy. He knows that UC has the horses to make that 4 in a row.

Don’t forget to show support for your favorite coach by voting him as the 2011 Liberty Mutual Coach of the Year at www.coachoftheyear.com