Share All sharing options for: November 15th Jump Off

"It’s hard not to think about," said senior safety David Rowe, who faces the double emotional challenge of also playing in his final home game. "The Big East title up for grabs, my last home game, playing Cincinnati — a team I’d like to beat before I get out of here. But you have to remember to keep your focus or none of it will matter."

Until this week I forgot that UC hasn't lost to Rutgers since 2005. Not sure what that means

Sanu was named Big East Offensive Player of the Week today for the second time this season after his 13-catch performance against Army on Saturday. He broke former Pittsburgh star Larry Fitzgerald’s league record for catches in a season (92) and Kenny Britt’s school mark (87). Sanu is draft eligible as a junior. And it’s hard to imagine his pro stock being much higher than it is now, with 94 catches for 973 yards and three games (counting a bowl) to play.

Coach Butch Jones said quarterback Zach Collaros underwent surgery on his broken right ankle on Monday morning, and all indications were that it was a success. As for Collaros' spirits, Jones said, "Typical Zach Collaros fashion -- very upbeat, very positive, all his thoughts were helping the team win as much as he possibly can."

Legaux, Pead, and UC’s Defense Are Here to Talk You Off the Ledge // Bearcats Nation

And let’s not forget about Cincinnati’s defense that just held the West Virginia Mountaineers to 17 offensive points. The Bearcats boast the best defensive line in the Big East that is only getting the more games they play together.

"With Collaros, when it's a pass play, he's looking to throw the ball,'' nose tackle Scott Vallone said today during the Scarlet Knights' media luncheon. "With this guy (Legaux), if there's a running lane, he's going to take off.''

The skinny: Scarlet Knights catch a huge break with injury to QB Zach Collaros (ankle). Coach Greg Schiano is on the spot to come up with a game plan to confuse and befuddle sophomore Munchie Legaux, who is making his first career start. Legaux’s running ability could be the X-factor. Sat., noon

So while we celebrate the success and contributions of Collaros, we lament his loss. But there is still Isaiah Pead, J.K. Schaffer, and Bearcats en masse to take on the Scarlet Knights and the rest of the Big East. Add Munchie to the mix and you have a chance to win the same way you did prior to his ascension. You may recall there was Tony Pike with Collaros in the wings and its the natural order in football and any sport. Ask any coach and they'll tell you, we want to put ourselves in a position to win and we want to put the best players on the field to accomplish that. With Zach done, UC still has the Munchies for wins and we'll see if their appetite can be satisfied with Legaux in charge.

Like I said, Griffin is 6’2″ but needs to pack on some pounds. It shouldn’t be too difficult, especially in a Dave Lawson S&C program, and considering he has the frame to add 10 – 15 lbs. As a freshman at Cincinnati I think it’s a good possibility he burns his redshirt on special teams because of his ability to get downfield so fast.

Not sure that Griffin doesn't redshirt. All 7 linebackers can't play next year, someone(s) has to sit.

The skinny: Scarlet Knights catch a huge break with injury to QB Zach Collaros (ankle). Coach Greg Schiano is on the spot to come up with a game plan to confuse and befuddle sophomore Munchie Legaux, who is making his first career start. Legaux’s running ability could be the X-factor. Sat., noon 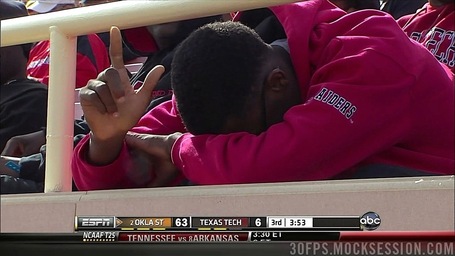 Rebecca Coriam: lost at sea // The Guardian
Not so fun fact in the last decade 171 people have disappeared from cruise ships