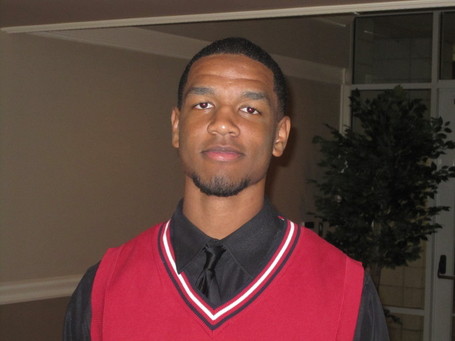 Gaither High School is kind of off the road in recruiting circles. Jarvis Giles put it on the map briefly in 2009, but this isn't one of the schools from that area that consistently pumps out talent with any sort of scale. There are a couple of NFL players among their alums like Carlton Mitchell and J.R. Russell but that is sort of an aside. Being a blog I think I am contractually obligated to mention that former FSU Cowgirl Jenn Sterger also attended Gaither. Rules are rules... moving on.

The point is that in Tampa there is a top tier for recruiters with schools like Plant, Armwood, and Tampa Jefferson and every other school falls into place after those three. Gaither is in the later category, and probably closer to the lower end. Still, Hannah got his fair share of attention from the recruiters. He was sitting on offers from Illinois, Texas Tech, Vanderbilt, South Florida and Rutgers. It came down to Rutgers and UC and on signing day he cast his lot with the Bearcats.

His size is no joke he is 6'5" 220 or so pounds. For most of his high school years he was focused on Basketball before it was prevailed upon him that athletic 6'5" guys are a dime a dozen in Basketball but much rarer in Football. From what I have read Hannah has the makings of a pretty good weakside end. The Basketball background implies a pretty high level of innate athletic ability. From what I have read his primary weapon as a pass rusher is his speed and quickness. Being a relative new comer to the sport, or someone is who is relatively new to taking it seriously I don't think it's a stretch to think that he isn't as sound technically as a guy like Cameron Beard was coming out of high school. The biggest question mark for me is defending the run. I haven't seen tape of any sort on him so I am just trying to read between the lines of the various reports from Tampabay.com.

His ceiling is very high, but he will undoubtedly take a red shirt this year. DE should not be a huge problem for this team now that Walter Stewart is playing his natural position. I think that the biggest reason that Hannah is going to need that red shirt is that there are a lot of nuanced things that he will need to work on. In high school he could win one v. one's because he was almost always the most athletic guy in the match up. He won't be able to do that here so he is going to need to work hard on his technique, develop a couple of solid pass rush moves. It certainly won't hurt for him to pack on 20 or 25 pounds of muscle.