Share All sharing options for: NFL Draft | Cincinnati's Adrien Robinson Selected By the New York Giants With the 127th Pick 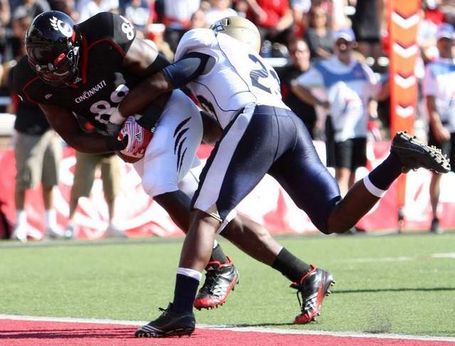 Adrien Robinson has officially cashed in on his monster Pro Day from early March getting taken in the fourth round by the Super Bowl Champion New York Giants. Robinson is kind of a prototypical New York Giant when you think about it. He didn't have a ton of production here at UC, even though his athletic ability has always been off the charts for the position.

I think that he can be a good fit for the Giants though. He is a great blocker for the position, in fact that is where he really stood out to me. Having him as an in line blocker was like having a third OT on the field. Robinson has put it all together on the field for short periods of time. But he will need to improve his consistency with the Giants. He can be a defensive nightmare and a major weapon for Eli Manning down the road. Congrats to Adrien Robinson! Go Bearcats