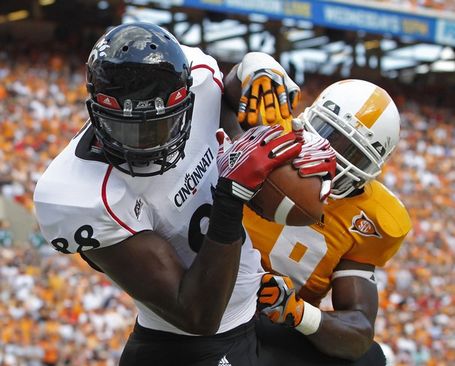 The tight end position has changed immensely in the last 10 to 15 years. From college to the NFL the position is far more wide receiver now than a primarily blocking position. Whether or not that is a good thing or not is really in the eye of the beholder. If you have a tight end who can exploit single coverage against linebackers and dime and nickle backs its a no brainier to flex that guy out and exploit the match up advantage. For guys like that whatever deficiencies they have has blockers are overwhelmed by their value to the passing game.

What the influx of young hyper athletic bad blocking tight ends has done is take TE's who block well and created a niche in the market that only a select few guys can fill. Adrien Robinson is a guy who can fill that role to a T. He is a big strong guy who at times can absolutely dominate at the point of attack in the running game. (see: here and here).

When you sit and look at Robinson's career numbers they aren't that impressive. 29 catches, 434 yards, 5 TD's, 15 yards per catch isn't a lot to write home about in an era when most of the guys in the TE class have had more receptions, yards and TD's in a season at least once, if not twice. But that speaks more about Mike Bajakian's struggle to fit the TE position into an offense that never really used TE's as anything more than glorified tackles.

That obviously cut into Robinson's production. As a receiver he can't do much with the ball if it never finds its way to him. Early in his career focus was the issue, but for the last two years it hasn't been a problem. The problem has been finding spots to get him the ball. It was an issue in each of the last two years. That's why fans of whatever team winds up drafting him are going to look at his stats and see why the pick was made in the first place.

With Tight Ends, hell with any position the draft is all about projecting potential. "Projecting" and "production" aren't the best of friends. Robinson is an intriguing guy in the draft (for me, as an obvious and admitted homer) because he is a guy who's best attribute* is in short supply in this draft class. That being said he has all the tools in the world to be a productive NFL TE but he has never been able to do more than flash that ability. But when he does it leaves an impression.

Robinson will be drafted, effectively, on his potential alone. As much as it can be maddening to draft guys like this if he works out, if Adrien can put it all together he can stick in the league for a while. He has that kind of upside. Also 5 bucks to anyone who figured that the word "upside" would only show up in the penultimate sentence, well done.