[Silvio rises from his bed. It is a lovely Thursday morning, and he is up and at it at the crack of 11]

Silvio:" What a wonderful morning. I think I will celebrate this occasion with a mini Bunga-Bunga party. Paulo!!!"

[Paulo enters the prime ministers bed chamber at a trot]

Silivio: Round up some of the usual girls, I think it's time to celebrate

Paulo: Uh boss, pardon me, but what exactly are we celebrating? You are still on trial for your last Bunga-Bunga party and your approval rating is at an all time low.

Silvio: Ah yes. All of that is true, but don't you know that I live a double life?

Silvio: Yeah I am prime minister in my spare time and in my other spare time I run a middling American College Conference

Silviio: Yeah, apparently its the only job that an italian can do properly in America.

Paulo: So how is that going?

Silvio: You know really great, its going really great. Not a care in the world. So, Paulo, the girls.

[Paulo turns from the room, as Silvio goes back to sleep]

Girls: [in a carrying whisper] God, he really is old

Paulo: The girls you requested boss

[Fade to black as the Bunga-Bunga party commences]

Paulo: Sir I have some bad news concerning your other part time job

Silvio: What is it?

Paulo: Boos this is a big deal, people are flipping out, you should probably say something about all this

[Silvio takes a long look about his room, and with a look of satisfaction he spreads his arms wide] 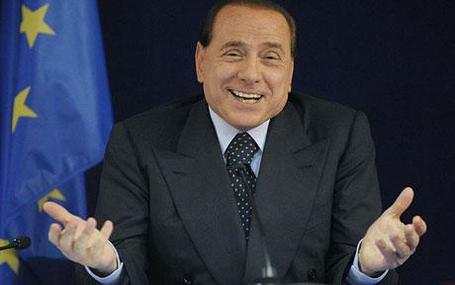