Share All sharing options for: Big 12 Undecided About Expansion Plans, For Now 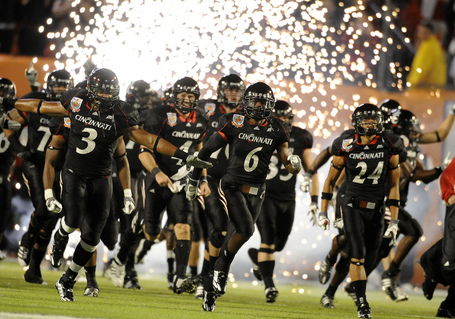 The news that TCU is heading for the Big 12 basically cratered half of UC's plans in regards to conference expansion. The UC administration is insisting that the preference is for UC to stay in the Big East, but that they are "fully engaged" in conference realignment. If that sounds like a bullshit, lawyeresque non statement to you, congratulations, you are absolutely right. It's not that hard to read between the lines. Basically UC is fully committed to the Big East but is also imminently aware that the Big East may very well not be a viable home for the Bearcats Football program, or any program if they carry through with the idea of casting off the Football playing members once and for all. UC has prepared for that eventuality and has all its cards on the table with the Big 12. It remains to be seen if that is enough to garner an invite. But there are a couple of things to keep an eye on. One is still Missouri which, as of today, doesn't have the 9 required votes to be invited to the SEC. The other is the rumor that BYU is no longer under consideration, the voracity of the claim is still unproven. And finally the last thing to note is the Big 12 is reportedly undecided whether 10 or 12 is the ideal number. I have no idea what you, as a UC fan, should be wanting to happen. No idea at all. My best guess would be that Missouri getting the SEC invite and for the Big 12 to go to 12 once more would increase the chances of the University of Cincinnati getting the call from the Big 12. But I can't even begin to assign a confidence interval to that scenario.

P.S. The Big East has still not released a statement on TCU taking up with the Big 12