Share All sharing options for: March 10th Jump Off

This will serve as a round up from last nights game and a preview for tonights. With this tight a turnaround I just don't have the time to get multiple posts up before the game starts tonight at 7 on ESPN. So lets start with the Notre Dame Fighting Irish. An argument can be made, and I would certainly be the one to argue it, that these are the two teams playing the best heading into the Big East Tournament. UC had won 6 of 8 down the stretch, Notre Dame has lost just one game, at West Virginia, since dropping two straight road games to Marquette and St. Johns in mid January. This is going to be a tough match up for UC.

The Bearcats just don't match up all that well with the Irish who absolutely love to use Tim Abromaitis as a stretch four. That causes UC problems because it really does takes one of this teams greatest strengths, the interior size and rebounding and neutralizes it. Abromaitis drags somebody, it was Ibrahima Thomas in the last match up, out of the paint and opens up the offensive glass. To compensate Cronin has to go to the bench to find someone who can match up with Abromaitis. The list of candidates is a short one, Darnell Wilks and Justin Jackson. Thats it. Both of them can match up with him, but are both cringe inducing offensive liabilities. In a game where UC is going to need to keep pace offensively playing four on five strikes me a problematic.

Rashad Bishop can probably guard Abromaitis, he has been known to cover 4's at various points this year. But he is probably going to be guarding Ben Hansbrough. Its great when you have a defender the caliber of Bishop, it can really makes things easy for a defense, particularly when you are playing a team that creates match up issues. But with a team like Notre Dame you have to pick your poison, which impossible match up would you like your ace defender to try and limit, but you can only pick one. For that reason I wouldn't be the least bit shocked to see UC in the zone pretty extensively in this game. Notre Dame is a good shooting team, check that, Notre Dame is a great shooting team, but a big part of their offense is a never ending array of fades, curls, and double screens for their perimeter players, all of which combine forces to destroy the integrity of man defenses. Going to the zone slows their offense down and makes it easier to give a good challenge to every perimeter shot.

To summarize I think that UC is capable of knocking the Irish out of the BET and onto a 2 line in the Big Dance, but it will take one of the best performances of the year.

We've said several times that Anthony Crater just isn't good enough to run the point in the Big East. Yet when he injured his shoulder and had to leave the game, it felt like a major loss. Actually, it ended up being a huge loss because no one else could even come close to running the offense (and God knows Stan Heath tried anyone he could think of in the second half). That's a big, big problem.

"Today just wasn't our day, and Cincinnati had a lot to do with it," said coach Stan Heath, who midway through the second half picked up his first technical in more than two years and whose team took its most lopsided loss of the season and matched the largest in his four seasons at USF.

"I'm proud of this group. We showed resiliency. We showed resolve. We showed character, you know, winning a huge game (Tuesday). We just didn't have enough fuel in the tank."

Yancy Gates was something else. The big man was unstoppable. No one on USF could guard him, and he took advantage all night. He controlled the early part of the game, and then the middle of the second half when UC pulled away. When he's scoring at will, UC's offense is pretty good. Jay Bilas and I have the same knock on him tonight, he didn't hit the glass at all. Only 4 rebounds. Gotta do better.

"Defense has been our formula for success, but the thing we’ve been focusing on lately is to try to play better on the offensive end to try to become an elite team," said UC coach Mick Cronin.

"We had a couple of big-time recruits at the Georgetown game and we are now their No. 1 school," Cronin said. "And they called us, their parents, on Monday morning, to tell us that."

This isn't all that new, but it has been while since I have done a jump off so this makes the cut. Good to see that recruiting is starting to pick up once again.

Bellbrook High School graduate Sam Longo, who was released from an Ohio State football scholarship in January, is transferring to the University of Cincinnati. His father, Gene, confirmed Wednesday that Longo will start school at UC on March 28.

Longo is instantly one of the two or three best linemen on the roster, even though he won't be eligible to play until 2012. Also conveniently the next time UC plays Ohio State. I will have more of this a later date. It might be today. It might be after the Basketball Season.

There have been hundreds of these, but I prefer this one 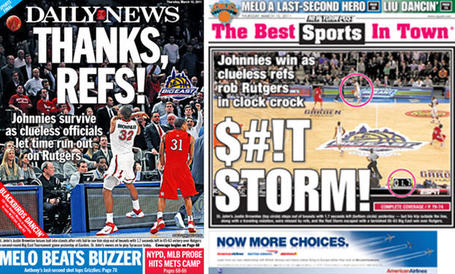 Shit Storm is just about right.

In becoming only the third team to win on the opening two nights of the Big East tournament since it went to 16 teams, MUs resume for a strong seed continued to go through the roof. More on the credentials at the end, but let's focus on the incredible emergence of the MU bench that enabled them to win on back-to-back nights by comparing last night's box to the first win over WVU during which Jae Crowder basically had to win the game by himself.