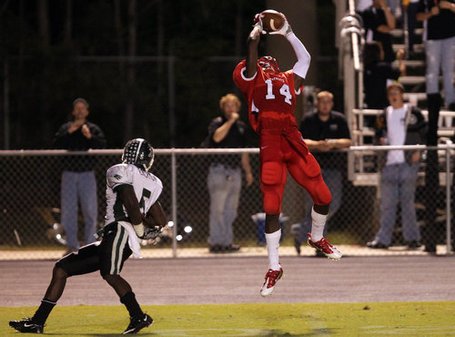 Alex Chisum is a player that it seems most UC fans are forgetting about when they think about the Freshman who will begin entering the program in about a months time. There are the early enrollees, Stephen Weatherford, Shaq Washington, Nick Temple and Dwight Jackson. Or about the headliner, Jameel Poteat. Or even Dyjuan Lewis who is still a Freshman athletically. Alex Chisum just kind of gets lost in the shuffle. That is too bad because I think that Chisum can have good season as a true Freshman.

Chisum is a very productive player who hails from one of the most successful programs in Georgia. The Sandy Creek Patriots have won two straight State Championships in Georgia and Chisum played a big role in both of those teams, especially last year. The Patriots have produced 6 NFL players over the past 14 years. The headliner of that group is without a doubt Calvin Johnson A.K.A. Megatron. Johnson set all of the receiving records in his career at Sandy Creek. Chisum has broken every last one of them. Johnson was on hand on the night that Chisum took down his record for receiving yards.

It was fitting that Johnson himself was there to witness it. He came home to Tyrone to have his No. 81 jersey retired.

Sandy Creek went on to win the state Championship in Georgia with a narrow 14-7 win over Carrolton who were led by Georgia Tech Running Back commit Broderick Snoddy. Chsium aguth 6 balls for 67 yards in the title game. He received a ton of attention, if not offers, late in the recruiting process from Georgia, Auburn, Alabama and the like. In the end he stuck with the Bearcats. He also had a fairly long list of post season honors. Chisum was named the Athlete of the year for the Atlanta area. And to cap off the year he checked in at 23 on the Atlanta Journal-Constitution's list of the states top 50 prospects.

Chisum is a big physical receiver. At 6'2" he has a definite high advantage over most DB's. What's more he knows knows how to use his physicality to his benefit. He has great ball skills on lobs and uses his size to create advantageous positioning on those throws. He isn't a one dimensional vertical threat though. He runs very good routes and uses a variety of faints and stems to create separation. Is faster than he is quick and has very good top end speed. But he isn't going to create something from nothing in space. Pretty much and one move and go guy. Has a tendency to be a body catcher rather than plucking balls out of the air. He does high point lobs very well, but he doesn't yet catch every ball like that. He will go up and make catches in traffic, but he doesn't always play through defenders as a runner.

Looking at the depth chart it isn't exactly rainbows and sunshine with the receivers at UC. The presumptive starting trio will be Dyjuan Lewis and Kenbrell Thompkins on the outside and D.J. Woods at the slot. In terms of pure unadulterated talent that is the best starting trio in school history (And yes, I do know that 3 receiver sets have been the norm for all of a decade). All of those guys are immensely talented, but only one guy has actual production to his name at this level, and that's DJ. The only other receiver coming back with double digit receptions to his name is Anthony McClung.

Basically there is a lot of room for the young receivers in this class to step in and make meaningful contributions as Freshman. Shaq Washington enrolled early and had a great spring, but there is still room for receivers who can make plays.

One thing that Chisum has going in his favor is that he isn't a slot receiver. That spot is loaded between the firmly entrenched Woods, the hard charging McClung and Washington that position is pretty much settled. The outside positions are far from settled though. The starters are set, but there aren't any established backups. I think the chances are good for Chisum to come in and win the backup job to KT or Lewis.