Share All sharing options for: June 10th Jump Off

Remember to submit your choices for the Down the Drive Ring of Honor! You can submit up to 3 players who you think should join the Bearcats elite. You have until July 10th to submit your nominees.

Plugging In The Pieces: Jason Kelce
The Eagles have known for years what other NFL teams are just starting to realize- There's a lot of talent at UC. Kelce will join former Bearcats Trent Cole and Brent Celek who have thrived in Philly. Kelce wants to make it 3-for-3. He was drafted as a Center but could conceivably play Guard. I think he needs to add some bulk to put up with those massive D-Lineman he'll have to deal with at the NFL level but he's also a very quick lineman, so he will have to balance his size and speed as he adjusts to the NFL.

Gates Selected for USA Basketball Training Camp - University of Cincinnati Official Athletics Site
This is the best possible thing to happen to Yancy Gates this offseason. Not only is it a great honor to be selected to this team but he has an incredible opportunity to take his game to the next level by playing against the best in the world. Usually this summer, he would have headed to California to train with Frank Matrisciano, but since he has been hired by Memphis, this gives a chance for Gates to really keep focuses throughout the summer.

Bengals Players Practice at UC | Video Library | Cincinnati.com
In case you missed it, the Bengals were back at UC doing some player-led offseason practice sessions. This time they were at Nippert. I'm completely in favor of having NFL players on campus as it builds a great connection between the college and pro team (albeit the semi-pro Bengals) and is a great recruiting tool for the program. Plus, if Andy Dalton or Jordan Palmer need any pointers, I'm sure Coach Jones would be happy to oblige: 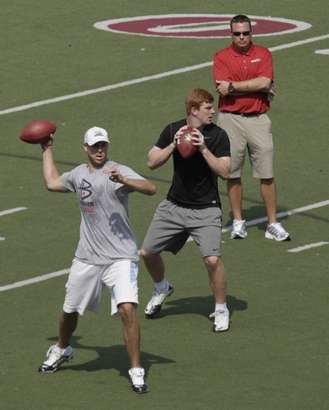 Klump Earns All-America Honors In The 800m - University of Cincinnati Official Athletics Site
Great honor for Kathy Klump as she not only broke her own UC 800m record by posted a time of 2 min 5.46 sec but also earned All-American honors. Congrats, Kathy!

Chuck Landon Reports Bill Stewart To Be Fired, Paid $600,000 Buyout - The Smoking Musket
This was as inevitable as me eating a large deep-dish pizza, drinking a 24-pack of beer, and puking my brains out a few hours later. Coincidentally, the whole Stewart-Holgorsen situation was just about as nasty. Stew could get the official axe as early as today and is getting a $600,000 buyout. Hell, after the rumors surround him and his wife were released, he's lucky to be getting anything.

Phil Steele picks Pitt as Big East champ - Big East Blog - ESPN
This seems like a solid choice as any as he picks Pitt to win the conference. Pitt has always been loaded with talent, at least from a recruiting rankings standpoint, but the biggest thing holding them back has been their coach. Now that the Stache is gone, Todd Graham may be the coach that can actually do something with that talent. To be fair, he lists USF, West Virginia, and Cincinnati all as possibilities to win the conference. I'm not going to put any money against that!

Pelosi seeks House ethics probe on Weiner - Yahoo! News
I'm posting this simply because of the headline and because I wanted to set up my own one liner: Soon enough, Congress be calling for Weiner's head. I know, great line right! Feel free to use that.

CFL's Saskatchewan Roughriders acquire negotiating rights to former Ohio State Buckeyes quarterback Terrelle Pryor - ESPN
As figured, Terrelle Pryor is getting interest from CFL teams. As if being in Canada was bad enough, Pryor will also have to adjust to the goofy-ass rules that CFL teams play with. Knowing his ego, he will probably turn down any offer a CFL team throws at him. But wouldn't it be hilarious to see Pryor subject himself to something like this: