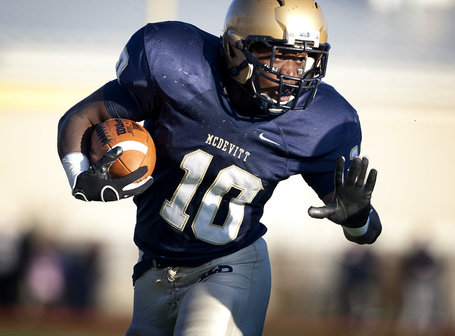 Poteat is by far the most heavily recruited Running Back ever to cast his lot with the Bearcats. Isaiah Pead held that title until Poteat became a Bearcat. Pead was recruited by some heavy hitters, West Virginia, Wisconsin, Pitt ect. But Poteat was recruited by everyone. At the top of the list was Notre Dame, USC, Tennessee, Florida ect.

Poteat blew up very early in the recruiting process. At one point he had something in the neighborhood of 50 scholarship offers from that initial massive pool he narrowed his options down a little bit. Depending on who you listen to he had a final group of Rutgers, Iowa, USC, Pitt, Tennessee, and UC with some variation in there.

When he made a commitment late in July it came as no surprise, to anyone really, that the Panthers were it. And there was much rejoicing in Pantherland. Poteat was one of the main figures in a Pitt Class that was, at the time, far and away the best in the conference, and among the best in the Country as well. Then down the stretch of the season the pre-season favorite, entered the final month of the season with a 2 game lead on the rest of the conference managed to lose the only games that really mattered, to UConn and WVU and cost Dave Wanstead his job. Everyone was distraught fans for choking away a chance for a BCS bowl. AGAIN. The rest of the conference was upset because we lost a terrific joke. The Fighting Wanstaches were crushed because the genisis of their blog name was gone. And recruits were crushed because the guy who recruited them was gone. There were going to be defections, there always are. But the short, and explosive career of Mike Haywood as Pitt coach sent everything over the edge. Quickly.

Poteat was one of the guys to abandon the quickly sinking HMS Pittsburgh. When Poteat opened the process back up the Bearcats were one of the schools that came to mind. A big reason for that was the positive impression  Butch Jones made on Poteat during the initial process.

"It's why I feel the decision to go to Cincinnati is a good one," Poteat said. "Usually when schools recruit you, or how I experienced some it, you'll deal with a coach that may not even coach you in college, Coach Jones visited me himself. That's something that stayed with me and meant a lot.

It also didn't hurt that his mom is something of a soothsayer.

Prior to making his announcement on July 28, the Poteats went looking for hats. As has become the custom with top prospects, the athlete sits at a table with hats from several of his final schools, and he puts on the hat of the chosen institution as he announces his future plans. Many UC fans felt that Cincinnati wasn’t a finalist since no Bearcat hat was sitting on that table, but the running back laughed as he recalled what happened as he prepared for his summer press conference.

Poteat is a running back in the truest sense of the position. While he isn't a down hill thumper he does run with good power between the tackles. For the most part Bishop McDevitt ran a very power heavy offense. Yes they had their spread sets, but they liked to run first. Poteat doesn't have great speed, he isn't a guy who is ever going to break 50 yard runs unless he is running through the team to do it. As a McDevitt guy and a running back he has had to deal with comparisons to LeSean "Shady" McCoy for his entire career. He seems to have a pretty strong bond with the former Panther. So that makes two members of this class who have gotten more face time than you would expect with very prominent NFL players, the other being Alex Chisum.

Anyways the point I was in the process of making before I distracted myself is that though the McCoy comparison is the one that everyone makes it isn't quite fair because they don't run with similar styles. At all. McCoy had a ton of shake to his game, he was great in tight spaces and had a knack for anticipating where the tackles were coming from, and most importantly when. Poteat on the other hand is a one move and go running back. In my opinion he has better acceleration than outright speed, and that's not a problem at all. By all accounts he has a pretty complete game he is OK in pass protection and very good catching the ball out of the Backfield. If I had to pinpoint a technical strength of Poteat it would be his feet, his footwork is very impressive, not only in the backfield but through the hole as well. He seems to do everything a running back is asked to very well, but isn't exceptional at one particular thing.

The biggest thing that Poteat has going for him is that he has a unique skill set among the current crop of Bearcat Backs. You have Pead who is a great back and is going to get a ton of carries this year. But his skill set and running style are set. Among the backups, at least the scholarship backs there isn't anyone who really diverges from the Pead mold. Darrin Williams and George Winn are basically the same as Pead, though Williams would probably be more accurately described as a quarkback. Of the incoming freshman Akise Teauge and Ralph David Abernathy IV are also quarkbacks, Poteat is the only "traditional" running back on the roster, or the only one with a scholarship, no offense Adam Fearing . Through the simple virtue of being a more traditional back Poteat has a good chance to break into the rotation this season. It also doesn't hurt that he is really ridiculously talented.