Getting To Know Akron

Share All sharing options for: Getting To Know Akron

The early season schedule for the Bearcats really works out quite well. It is one off, Austin Peay, one on, Tennessee and then of course one off against Akron. That is not to say that Akron is a push over. Well, they kind of are but they have also given UC a couple of pretty interesting games in the last five years. First there was the surprisingly close match up in 2006, won by the Bearcats 20-14 behind a stellar performance from Dustin "Instant Offense" Grutza. Then there was the shockingly close 2008 match up, won by UC 17 to 15 which introduced Bearcat Nation to Zach Collaros and informed everyone just how special that team was.  You can see the highlights to that game here, but since the audio track has been shut off I recommend playing this in the background for the full effect. Its time to get to know the Zips.

U of A was founded in 1870 just about a mile or so from what would become downtown Akron. School was actually founded as a religious institution affiliated with the Universalist Church of America. The ownership of the University was eventually transferred to the city of Akron and later became a State university. U of A has a somewhat noted history as a research university. That reputation sure wasn't hurt by the nearby Goodyear corporation and it's practice of pouring millions up millions of dollars in the Universities research arm to basically do the leg work on their Research and Development. Akron proudly proclaims it place as "A world leader in Polymer research." Thanks Goodyear, they also made a very public thankyou to Goodyear by naming their bright shiny new polymer center the Goodyear Polymer Center. 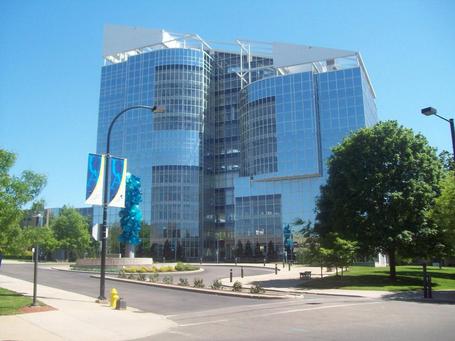 This is how you thank a massive multinational corporation.

Like UC Akron just wrapped up, or is in the process of wrapping up, a massive university altering masterplan. This plan completely changed the face of the institution and brought it into the 20th century. It was also a valiant attempt to shed the "Commuter School" label that dogged the school for centuries. Unlike the UC master plan the Akron one also had the foresight to address their Stadium Issues, but the less said about that the better. 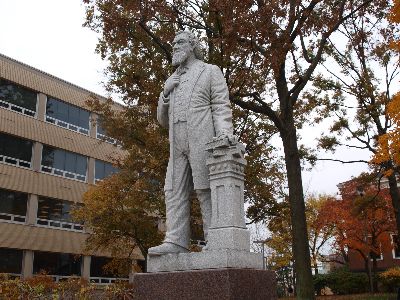 The Wagon Wheel Trophy has it's roots in Butchtel, take it away Wikipedia

The story goes that John R. Buchtel was searching for a site to start a new college in 1870 near what is now Kent State University when his wagon became stuck in the mud. The horses pulled the wagon apart and one of the wheels ended up being buried. Buchtel would eventually settle on a site in Akron for Buchtel College, which would eventually become the University of Akron. In 1902, while digging for a pipeline in Kent, the wheel was discovered and eventually came into the possession of Kent State dean of men Dr. Raymond Manchester. It was he who suggested in 1945 that the wheel be used as a trophy for the winner of the Kent State-Akron football game

The first game featuring the trophy took place in 1946. Kent nee Kent State dominated the early years of the rivalry winning the first 9 contests before the series was discontinued at the conclusion of the 1954 season. The series was renewed in 1972 with a 13-13 tie but Kent would win one more game before the Zips put one in the win column. Since the series was renewed Akron has had control of the rivalry, winning 19 of the last 31 contests. Kent State currently holds the edge in the series with 20 wins to the Zips 19.

You don't know just how tempted I am to just say Yvette Nicole Brown, post this clip and move onto the next part. But I am not going to do that. Instead I am going to break out the old Tale of the Tape with the most notable practitioners of the two forms of Football in Akron's history.

Ampaiptakwong takes it by a nose.

As you would expect the defending national champions have a strong team coming back, despite the fact that they had 5 players depart the program and be selected in the top 8 of the MLS SuperDraft, with 7 going in total...Oh right, wrong Football.

Truth be told Akron is not very good. They haven't been very good since the glory days of Charlie Frye and Domenik Hixon. The J.D. Brookhart era started out with a bang, they went a combined 13-11 his first two years and captured their first and only MAC Championship in 2005. In the last 4 years of the Brookhart era the Zips went a combined 17-31 bottoming out with a 3-9 year that cost Brookhart his job. Brookhart recently joined the staff at Colorado after taking a year off.

If the Zips thought that was bad the first year of Rob Ianello was downright dreadful, and they can probably expect more of the same in 2011. Ianello is a gifted recruiter, he managed to put together the 7th best recruiting class in the MAC despite posting the worst record in well over a decade. But the jury is still out on his ability to guide a team, and likely will be for a few more years.

Cupcake, and the last one of the year.