Bearcats Building a Pipeline in Indianapolis

Share All sharing options for: Bearcats Building a Pipeline in Indianapolis

There are two really interesting developments when it comes to the recruiting of the Cincinnati Bearcats Football program over the past 5 or so years. The first is that UC staffs have made a pretty dramatic move upwards in terms of the schools that they are competing against. Once upon a time Miami (OH), Ohio, Ball State and the rest of the MAC were pretty consistent sparring partners. Now those names have been traded for the likes of West Virginia, Mississippi, Wisconsin, Tennessee ect. That is the trend that is easy to spot because offer lists are usually public and easy to track. And yes, I know that all offers are conditional and might not have been commitable at the time the decision was made.

The other trend is a little bit harder to spot. It's not just how a staff chooses to cast their recruiting net, often times where is just as important. There are certain cities, certain areas of the country that produce an extraordinary amount of talent. It's not just that they have some of the best talent in the country confined to one area. The top end guys are great to have in a city, but for a city to have a reputation as a recruiting the depth of talent is more important.

When recruitnicks talk about Football hotbeds certain cities will always stand out. Miami, Tampa, Atlanta, Houston, Dallas, and Los Angeles will all be near the top of the list. In the group below there are cities like Memphis, Cincinnati, Cleveland, Pittsburgh and San Deigo. One city that has slowly but surely building it's profile in recent years is Indianapolis. The last two Cincinnati coaching staffs have very, very quietly become a big player in recruiting in Indianapolis.

This is a map of Bearcats Football recruiting from 2002, the last year that internet commitment lists are available, until 2011. If you zoom in on the Indianapolis area it becomes clear just how active UC has become in that area. From 2008 through 2010 Butch Jones and Brian Kelly landed 9 Indianapolis area players, 10 if you count Columbus as part of the Indianapolis area. All this is coming from out of no where.

Rick Minter and Mark Dantonio made no efforts to recruit the Indy area. Primarily because both of them fielded staffs with more extensive backgrounds in other states. Minter in Texas and California, and some JUCO's in Mississippi and Kansas, Dantonio in Michigan and Ohio.

If there is one coach who you can single out as the genesis of this new found pipeline it would have to be this guy. 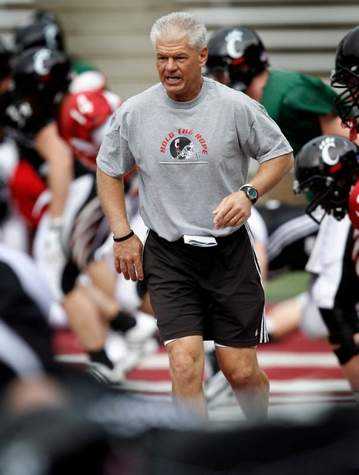 I have certainly been hard on Coombs for his coaching, justifiably so in my opinion. But there is little denying that Coombs is a gifted recruiter. His hiring was the genesis of much improved recruiting efforts in the city of Cincinnati itself. Its hard not to be impressed with his work on the recruiting trail.

But what I really like about Coombs is that he has opened up recruiting in an area that was, by and large foreign to previous UC staffs. And it's not just hyperbole that compels me to label Coombs as the genesis of this fairly newly struck pipeline.

So 12 out of the 14 Indianapolis area Bearcats were recruited by Coombs. That is just a phenomenal strike rate for one man in one city. A lot of his success stems from his pretty extensive contacts developed in his years as the head guy at Colerain. But it is one thing to get to the docks with a prospect. It's a completely different story getting that same kid to hop in the boat with your program.

The best part about this though is the way that Coombs has gotten UC in the door with the Warren Central program. 6 of those 14 players are former Warriors. Warren Central has become one of the most prolific Football factories in the Mid West. I would put WC on a par with Glenville. The best news is that as great as the start of this class has been for the UC/Warren Central connection there are still a couple of big fish left in the pond to the North West.