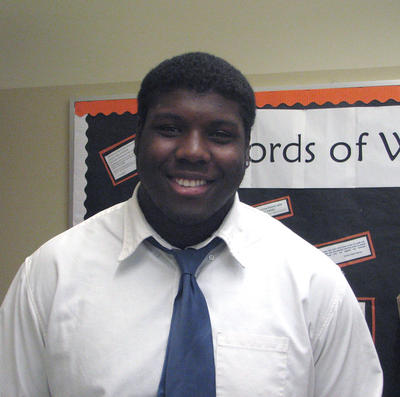 Withrow is a school that always produces one or two guys in a class that grab the attention of colleges. UC has had a pretty good relationship with the Tigers and have nabbed their fair share of players from the Madison Rd. school. In the last decade no fewer than 5 Tigers have signed with the Bearcats. 6 if you count Jamar Howard who eventually matriculated to UC via a Junior College.

Early in the process Mitchell was relatively under recruited. He was a two way player for the Tigers as a guard and as a defensive tackle. There was some speculation about what position he was better suited for. Thats why some scouting services evaluated him as a Guard and others as a DT. Mitchell had two great showings at the UC and Kentucky camps. UC offered him and Kentucky didn't he committed shortly after garnering the UC offer. Mitchell was a pretty good wrestler as well, he wound up 6th in the state at Heavyweight last year.

Mitchell is a two gap defensive tackle, or more accurately, he will develop into a two gap DT. He has great size for a high school defensive lineman at 6'2" 300. But he isn't the cliched high school DT. He carries his weight extremely well. His wrestling background lends itself to play in the trenches. He isn't particularly explosive laterally, but that's shouldn't be a problem in this defense which is predicated on defensive tackles holding up at the point of attack and spilling plays outside.

Pretty good. I think Mitchell has a chance to join the rotation this year. I don't expect him to do that and I think that he would be well served to take a red shirt this year but the chance is there. After Derek Wolfe, John Hughes and Jordan Stepp the rest of the DT rotation is in the air and will likely be comprised of some combination of Brad Harrah, Roney Lozano and maybe Cameron Beard with Mitchell having a chance to join that second group. I'd like to see him take a red shirt this year, but I wouldn't be stunned if he didn't.