Share All sharing options for: Latwan Anderson Commits to The Cincinnati Bearcats 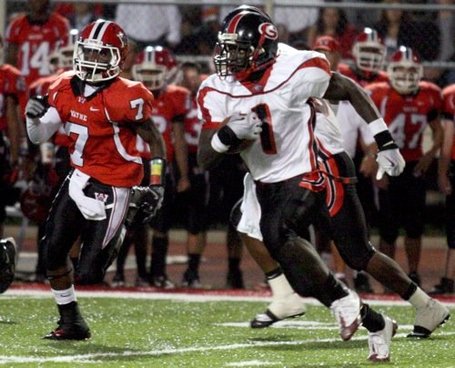 Latwan Anderson is in the boat. Anderson took to his twitter account tonight to declare his allegiance to the Bearcats. My understanding of things is that he is not going to join the team this season but will spend a year at a prep school somewhere in California before joining the team in December. There will be time to sort through the entire pciture tomorrow but for now the basics. Anderson enrolled at Miami, but he was not on a football scholarship last year, he was on a track scholarship. NCAA rules state that an athlete can not participate in another sport prior to competing in the sport they are on scholarship for. They are allowed to be on the team, just not to compete. The rule was implemented primarily to prevent schools from circumventing the 85 and 25 scholarship limits. He left Miami in December and has been on the market since. There was an ongoing assumption for a while that he was going to land at USC. Instead he is coming to Cincinnati. Because he never played a game for the Hurricanes Anderson will have 4 years to play for the Bearcats. This is a boon to the class of 2012 even though he won't be considered as a member of the class by the recruiting services.Regardless, talent is talent, and Anderson has a ton of it. There is a big risk involved with bringing Anderson into the program. Character questions have dogged him for the last three or so years, ever since he transferred from St. Edwards to Glenville prior to his senior season and will continue to do so, but he is worth the risk IMO. The assumption is that in the right environment with enough support he will blossom. There is plenty of precedent for that line of thinking, but it's never a given.