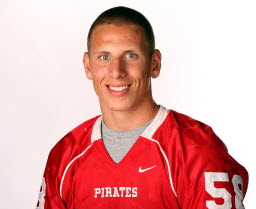 Chad West hails from Perry High School in the Cleveland area. Though being completely honest Perry is closer to Pennsylvania than it is to the city itself. But that's an aside. Perry has a pretty strong program in Football. They made the playoffs in three of West's four years at the school, the 2009 season being the only year where the Pirates missed, and even then just barely. They have success on the field but Perry hasn't been a mecca for college coaches. Last year was the first that I am aware of where Perry had two guys sign with FBS schools. West, obviously, and Anthony Kukwa who signed with Ball State. West was a big time player for Perry. He was first team All Ohio as Senior.

West is a tall long armed defensive end. Down the line I think he is ideally suited to contribute as a strong side defensive end. He is a very powerful player and he just absolutely bosses the offensive lineman he faced in high school. It should be noted that Perry is a Division IV school, though their league is for the most part Division II and III schools. That might have something to do with his overwhelming advantage at the high school level. Putting all of that to one side I think West is technically sound and very well taught and he comes to UC with a pretty good knowledge base to work from.

Red Shirt. West has the talent and the tools to play the SDE position. But he needs to get bigger, much bigger. Just for a reference point Dan Giordano currently plays the strong side end position at 261 pounds and is to be honest a little bit on the light side. It will be interesting to way how West develops because he reported to camp weighing an even 240, supposedly. If that is legit then a move to DT might be in his future.