Munchie Legaux drew the start against Purdue, which was a surprise to basically everyone on the planet. His first start under the new regime showed some of the same old issues from last year. But he reached a level of competence against Purdue that he didn't really show a year ago.

There is no point in going line by line dissecting the every move of Munchie Legaux but there isn't really a point. It's one game, one data point. There is no point in hanging a great deal of credit or blame on one person when the sample size remains at one. But Munchie did flash some growth in the Purdue game, and he did it in a moment when the game was still on the line

3rd and 9 is far from an ideal position for an offense to be in. Its an obvious passing down, so the defense knows exactly what you are likely to do, pass the football at least 9 yards down the field. But the situation was about more than down and distance. The score was still 14-7 on the Bearcats first possession of the second half, and Purdue was still nominally in the game. Converting that 3rd and 9 was crucial to putting the game out of reach. So Darin Hinshaw dialed up one of his default big play routes, the deep cross. 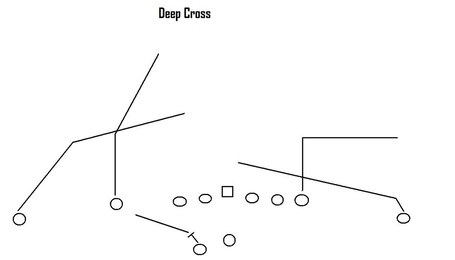 Let’s take it frame by frame. 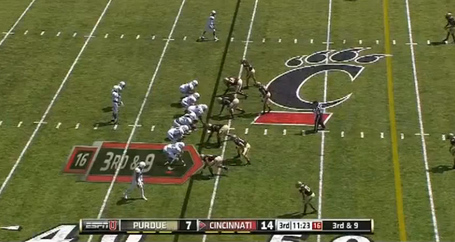 The Bearcats align in 11 personnel, which means one running back (Hosey Williams), one tight end (D.J. Dowdy) and three receivers (Max Morrison, Anthony McClung and Chris Moore*). This is UC's base personnel grouping for this situation. Pre snap Purdue, which is in nickel feigns blitz.

* Could be Jeremy Graves 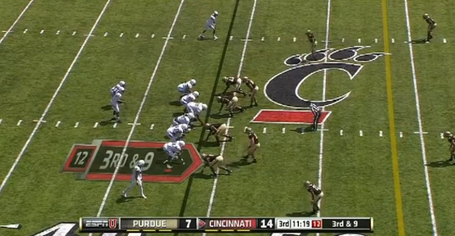 Just before the snap Purdue backs out of the blitz and drops into a conventional nickel look. The two high safeties tells Munchie that it is probably cover 2 which leaves the middle of the field available. 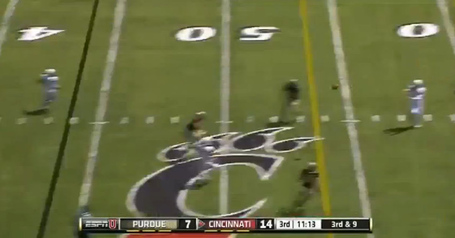 Morrison finds the soft spot of the zone. It’s hard to tell from this angle, but this is just a great ball from Munchie. More on that in a bit. 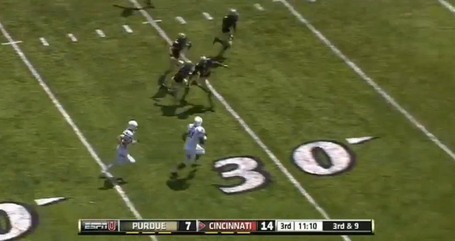 Morrison cuts across the grain of the defense and finds himself with an escort down the sideline in D.J. Dowdy. He is knocked out of bounds roughly 20 yards from here.

This play one more time from the endzone angle. 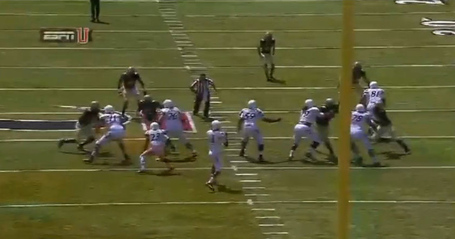 In this picture you see the linebackers gaining depth, and one of the two high safeties back pedaling on his hash. Munchie is looking out of frame, because his read is the play of the other safety. 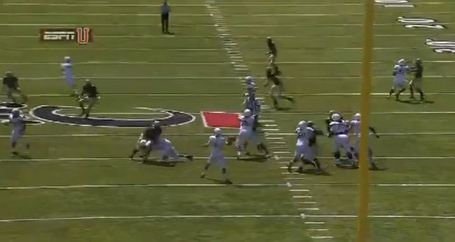 The ball is about to be released and Max Morrison is still out of frame. 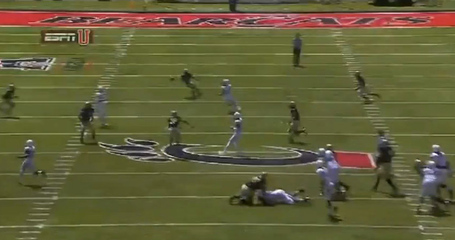 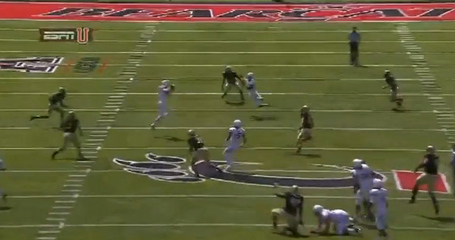 Catch and run. 40 yards in a heartbeat.

Two things about this play. One is the design. All long developing routes like this one seek to do the same thing, put a man into a space on the field after it has been left unoccupied by the defense. The most common way to do that is to set up two receivers to the opposite side to run off the defense and create a void for the deep crosser to run into. This is how Larry Fitzgerald and the Arizona Cardinals do it.

The Bearcats do something else on this play. Rather than setting up the void on the far sideline like the Cardinals do, the Bearcats create the void on the near hash mark by having Anthony McClung run a skinny post in between the two safeties. For Purdue, in a perfect world, the left safety leaves McClung for the other deep safety and drops down to take away the deep cross.

Instead what happens is that the left comes off his hash to take away the skinny post, leaving a void for Munchie to throw into and for Morrison to run into. Just a really great design from Hinshaw.

2) The second is the throw from Munchie which was picture perfect. The throw isn't the hardest by any measure. The coverage isn't exactly tight and there is a lot of open grass to lead the receiver into, but he still has to get it up and over the linebackers and drop it in between six defenders. But it’s not the throw so much as the timing that shows how far Munchie has come. He hit Morrison on time and in stride so that Max could do damage after the catch.

That type of throw is just not a club that Munchie had in his bag a year ago. It is by no means an indication that he has arrived as a finished product. But it gives me a little more confidence in him than I had when it was announced that he was starting the Purdue game. Now he just needs to keep making it.

More from Down The Drive: