Share All sharing options for: July 18th Jump Off 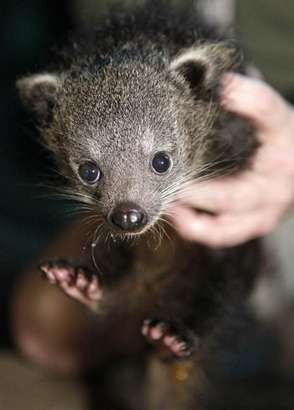 The baby bearcat born at the Cincinnati zoo last week via cmsimg.cincinnati.com
As many of you know, bearcats are deceptively cute when they're young but become blood-thirsty, wild beasts when they grow up: 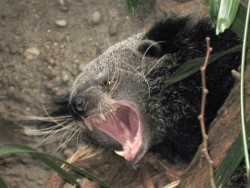 via images3.wikia.nocookie.net
Anyways, on to the Jump Off:

Cronin, Cincinnati Ready To Pick Up Where They Left Off - Jon Rothstein - MSG.com
Jon Rothstein loves the Bearcats, Mick Cronin, and Sean Kilpatrick and if you don't believe me, just read this excellent piece he wrote about them and their upcoming season. Expectations for next season are sky high considering the run they made last year against stiff competition, the core scorers that return, and the very impressive recruiting class Mick has brought in for next season. I hate to be a Buzz Killington, but to expect this Bearcats basketball team to cruise through next season is too farfetched. I think they are very capable of finishing among the top 4 in the conference and evening winning a Big East championship, but I wouldn't be disappointed if they finished 5th-8th, either. The fact is Cincinnati loses its top defensive player in Rashad Bishop, Cash's knee is still a big concern, and the freshman for the most part are going to have a hell of a time adjusting from high school to the best conference in college basketball. The Bearcats have all the talent in the world to reach new heights next season but don't go jumping off a bridge if they win 'only' 24 games and finished 6th in the conference or something. I'm just sayin'.

Collaros Tabbed For Davey O'Brien Award Watch List - University of Cincinnati Official Athletics Site
Zach could easily follow Tony Pike as being the next great quarterback in UC football history. While he's very dependent on solid offensive line play and the consistency of the Bearcats running game, a lot of it, obviously, falls on Zach's shoulders. While some of the interceptions last year were probably just bad luck, Zach's a gunslinger that thinks he can thread the needle on every pass. We've seen how talented he is but a better understanding of Coach Jones's system and him making better decisions will allow him to put up gaudy numbers in 2011

Joseph Spencer commits to Illinois
This was definitely surprising to me for a couple of reasons. First of all, everybody knows that Cincinnati has and is desperately in need for offensive lineman. One could argue that linebackers are more important right now as there are already 2 O-Lineman on board, but depth is still a major issue there. Secondly, I was under the impression that Joe Spencer was really good friends with current OL commit Kyle Williamson of the same class and also had a good relationship with Coach Jones and co. Maybe he just doesn't trust Don Mahoney. If that's the case, I don't blame him. Anyways, I don't think Spencer's recruitment is anywhere close to over as Ron Zook could be in his last year as Illinois head coach if he doesn't do something miraculous in 2011.

BearcatReport.com - Peterman narrows his list to a top 5
Definitely having UC in his top 5, Nathan Peterman was an under-the-radar prospect after his junior season. Regardless of statistics at the high school level, he's definitely a hardworker who has hit the camp and college circuit hard this summer. I'm always in favor of a kid who will put in the extra hours to try to improve his game and learn whatever he can. He has since picked up some offers from some BCS programs including UC. Expect the Bearcats to take 2 quarterbacks in the 2012 class and if Bennie Coney doesn't come on board, I'd like Peterman to be one of the headliners.

West Virginia: No. 1 on Top 10 Unruly Fanbases | LostLettermen.com
West Virginia is notorious for burning couches in a moment's notice and apparently has risen to the top of the list among annoying fanbases. While I have plenty of friends who are Mountaineer fans and inside of a 10 beer limit are docile, I have heard horror stories about dealing with WVU fans at their stadium. I'm sure that like most instances, that is the exception and not the rule but you have to figure that with beer sales being approved inside Milan Puskar Stadium, the Mountaineers won't relinquish this title anytime soon.

To ditch 'Drive-Thru U' tag, South Florida needs own stadium - NCAA Football - CBSSports.com
South Florida has done a phenomenal job upgrading their athletic facilities since joining the Big East such as new football practice fields, renovations to the Sun Dome for basketball, and new facilities for Olympic sports. Add to that, the football team has done a pretty good job of building a solid fanbase and creating buzz around the program. The one thing that seems to hold them back is that they play in an NFL stadium. Now, there's nothing wrong with Raymond James but gameday for college games are just so much better in on-campus stadiums. Add onto that, South Florida won't have to pay rent to use their own facility and can pocket all of the revenues gained there. USF's fanbase is large enough that I think an expandable 42k-45k stadium would be appropriate.

Tressel records show compliance issues - College Football Nation Blog - ESPN
Despite how much Ohio State fans wants to give excuses, Jim Tressel has been failing to comply with Ohio State rules since he got there almost a decade ago. Well, these documents prove it as he received consistent warnings from former Athletic Director Andy Geiger way back in 2001 and 2002. This coming in the face of stupid-ass high school coaches like Jim McQuaide who think Jim Tressel should be honored in the State of Ohio. The fact is, he was a liar and a cheat and his actions to allow players to get away with what they did was never good for College Football. Good riddance.