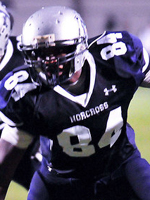 Mouhon is one of two Norcross Bluedevils that will be joining the Bearcats this year. As I detailed in the Demetrius Alston post that Norcross has turned into a little bit of a Football factory of late. The Atlanta area in particular is always pretty deep and loaded with talent.

Mohoun was the first of the Norcross players to commit in December. He had offers from Syracuse, Vanderbilt and Mississippi State among others. Mouhon had a good senior year racking up 80 tackles, 11 sacks and 1 pick. He also had a pretty good showing in an All Star game that had people wondering just how he got out of SEC country. Also he has a spectacular name, not Good Luck Jonathan spectacular, but spectacular. It sounds like the name of a British Viceroy of India in the 1870's

Mouhon is a raw and very athletic defensive end. He gets off the ball very well, generally takes good pursuit angles and is usually in the right place at the right time. Mouhon appears to be better rushing the passer than he is at playing the run. The two things that he needs to work on are his strength in general and his tackling. Like I said he gets himself in position to make plays a lot, but he needs to get better at finishing plays.

Red Shirt. Mouhon needs to spend a lot of time in the weight room. He is a legit 220 pounds, but he isn't that strong and would be well served to pack another 20 to 25 pounds on his frame. His long term potential is high because he is very, very athletic. But he needs to get stronger and to refine his technique and getting a year to develop would help him immensely.