It's not last year, but UConn has tourney magic - CBSSports.com

It's already begun, with people tossing around the name "Kemba" after the UConn Huskies have reeled off two wins in the Big East tournament. It's in reference to last year's ridiculous run to the tourney crown, but this isn't the same team. Jim Calhoun knows it and so do veterans like Alex Oriakhi, who was around for last year's memorable five victories in five days.

The Pirates have wins against Georgetown, UConn and West Virginia. They also have losses to DePaul, Rutgers and Villanova.

Losing to DePaul is like a gorgeous woman who's smart and funny but smokes. Total buzzkill. Right Buzz Killington

"They’re a team that relies on offensive efficiency, and they always shoot a high percentage," said UC coach Mick Cronin. "The one thing we did last time, we got 20 points off their turnovers with 13 steals. That’s going to be a huge key. Easy baskets are going to determine who wins the game. If one team is struggling to grind it out to get a good shot and the other team is getting easy baskets, that’s a tell-tale sign."

Georgetown's ability to score in different ways is crucial for the rest of the season. Today, Porter and Sims dominated inside. Tomorrow, Thompson and Clark could destroy from the three point line. The versatility on offense, coupled with Georgetown's insane defense, is a combination that could make us all very happy in the next month

The Panthers opened the second half on a 6-0 run to cut the Georgetown lead to two, and it seemed as though we were in for a classic Big East battle the rest of the way. However, the Hoyas answered back with six straight points of their own to regain control of the game. Pittsburgh slowly faded from that point on, and Georgetown extended its lead to as many as 19 points before coasting to victory. 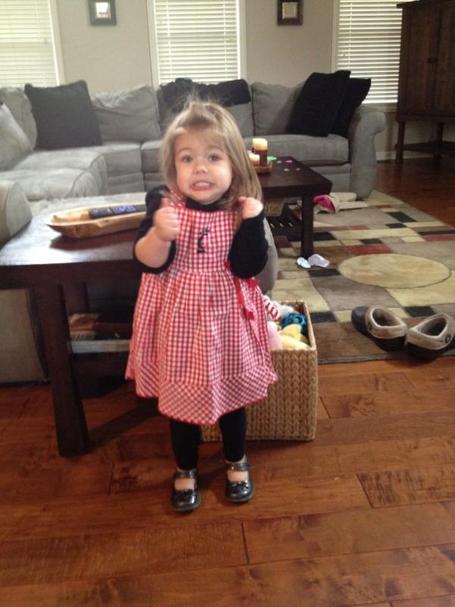 Adoreable. Try it yourselves parents

UNLV Runnin' Rebels are getting into the exempt event business for 2012, as it plans to host an eight-team eventwith a format that's to be determined. The Mountain West power has signed up Cincinnati (Big East), Iowa State (Big 12), Jacksonville (Atlantic Sun), Northern Arizona (Big Sky), and Oregon (Pac-12) so far.

Uh, hell yes to that

Because of the graduation of Alex Hoffman, Randy Martinez and Evan Davis coupled with the injury rehab of returning starters Austen Bujnoch and Sean Hooey (that has severely limited their participation), the Bearcats have a very inexperienced offensive front this spring. The group was consistently beaten in the one-on-one pass rush drill earlier in practice, but when it came time for scrimmaging, the unit fared much better and showed the ability to create some daylight for the UC running backs. Coach Jones talked about the difference between drills and team situations.

A good chance to build some depth up front. It's getting better along the line, still not where it was in 2008 or 2009.

Williams' level of comfort didn't come overnight. He first had to settle on a college destination, coming out of tiny Cincinnati Hills Christian Academy (enrollment: 172). After attending a camp for high school prospects at Marge Schott Stadium, Williams decided staying home was the right move for him and before long, UC head coach Brian Cleary found what he thought would be his shortstop of the future.

Well, eight years might as well be eight decades considering the way realignment has turned conferences into corporate raiders, all too eager to destroy each other to preserve themselves. At turns, expansion has been part "Lord of the Flies," part Generation Me. But it has completely taken the biggest toll on the Big East -- turning a conference that had already lacked national respect into one that is a collection of teams formerly known as non-automatic qualifiers.

The only thing that can possibly make this work is if the negotiations for the next TV contract go swimmingly. NBC is said to desperately want the Big East to help anchor their new/old sports network. But if I am Mark Lazarus these last couple decisions, first adding Memphis now Temple would have me rethink that strategy. Football and TV, meaning market size, drive all of this. The Big East is strengthening it's market size, at the cost of Football strength. Its probably not going to work.

Soccer By Ives: UCL Rewind: Messi scores five to lift Barca, APOEL gets through on penalties

Messi became the first player to score five goals in a UEFA Champions League game as Barcelona ruthlessly routed Bayer Leverkusen 7-1 at Camp Nou to advance to the quarterfinals on a 10-2 aggregate.

Lionel Messi is better at what he does than anyone else is at whatever it is that they do.