Share All sharing options for: November 8th Jump Off

There are, of course, just as many differences on West Virginia's team and the personality may be a bit changed as well. The defense Jones will face on Saturday is nothing like the dominant unit that showed up in his first year at Cincinnati. Last year, it gave up just 10 points to the Bearcats, but in its past three games, WVU is averaging 36 points allowed.

Butch Jones continues to build on his impressive sophomore effort with the Bearcats, improving to 7-1 (3-0 in Big East play) with a 26-23 road victory against Pittsburgh. Already with a victory against Louisville, the Bearcats now have a two-game buffer on the competition for the conference's BCS bowl bid. Unfortunately the road to a BCS invitation will not come easily, with away games against Rutgers and Syracuse following Saturday's meeting with West Virginia. A win over the Mountaineers puts the Bearcats in a great position to win the league title outright. A loss will create a jumble for the title, and then tie-breakers suddenly become the differentiator between the Champs Sports Bowl and a BCS bowl appearance.

That's right, noon kickoff, ABC. The last time UC kicked off at noon on ABC was the last time they won a Big East championship two years ago against Pitt. I'm not sayin', I'm just sayin'. Talk about a showcase game. National TV, main network, PBS, big crowd, undefeated in conference. With the NC State game a close second, I will call this the biggest stage of Butch Jones' tenure at UC. Recruiting is all about image and relationships. You place another giant building block on both if the win streak balloons to seven Saturday.

He knows the deck is stacked against the Mountaineers. "We need to put it together all four quarters. I think that's what's haunted us these past couple games," Miller said. "These next three games we're going to have to play four quarters full throttle. ... We can talk the talk. We need to start walking the walk."

"I think we’re getting to that point where Paul Brown Stadium will become a home venue for us," he said, "but when you practice at (Nippert) Stadium and your players have played a lot of home games in that stadium…the thing we have to be able to do is continue to put people in the seats in order to play more games at Paul Brown Stadium and then our kids will become more accustomed to playing there."

Will NKU stun Cincinnati too? // cincinnati.com

The Norse knocked off Bob Huggins’ West Virginia team from the Big East Conference, 77-74, in Morgantown, to win their first game against a Division I team after 18 straight exhibition losses. "This is a Big East school that’s really good," said NKU coach Dave Bezold. "I don’t want to discount any of the other wins, but this is pretty daggone special."

I hate Bill Koch and his stupidity

Cheikh Mbodj will not play tomorrow night in UC’s exhibition game against Northern Kentucky and already has been ruled out for the Bearcats’ regular-season opener Sunday night against Alabama State with what Mick Cronin calls a high right ankle sprain.

Senior Missy Harpenau (Cincinnati, Ohio/Mother of Mercy) and freshman Caylin Mahoney (Fort Worth, Texas/Keller Central) have both received the BIG EAST awards this week, the conference announced Monday, after a 2-0 record over the weekend. The two starters performed well over the Bearcats’ undefeated weekend. Saturday, the team defeated Marquette. This snapped the Golden Eagles 10-0 conference record. Cincinnati also defeated Syracuse in dominating fashion, three sets to none. The last time two Cincinnati players have received the BIG EAST’s major weekly awards in the same week was in 2009 when Stephanie Niemer and Megan Turner were honored.

There is a "push" for BYU to join the new-look Big East, according to BYU head coach Bronco Mendenhall. The coach also told reporters at a Monday press availability session that there are "conversations in place" for the Cougars to renounce their football independence and flee for the ever-expanding BCS automatic-qualifier conference.

BETWEEN THE SYNAPSES: SAD BAMA BRO // Every Day Should Be Saturday 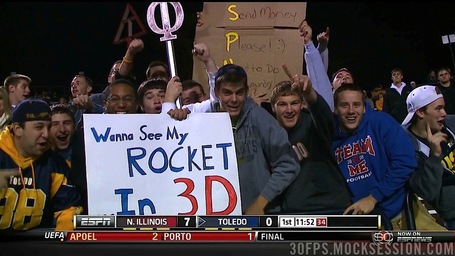 Steve Jobs’s Real Genius // The New Yorker
Malcolm Gladwell on Steve Jobs. I am all in.