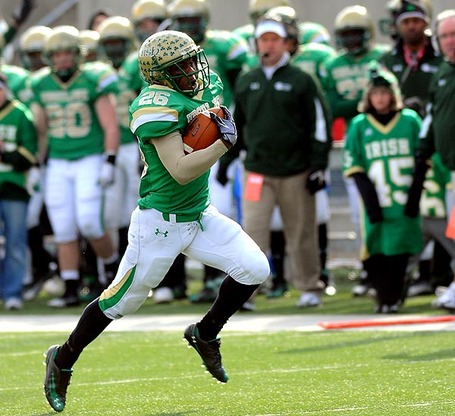 Teague was a guy who really flew under the radar as an under classman. Ursuline is the best small school program in the state right now. and it's not even that close. Still Teague went under the radar because he wasn't really the star of the offense. Allen Jones was the feature back until he graduated as the schools all time leading rusher. Teague was a part of the offense to be sure, but he wasn't the focal point. He played some running back but was primarily in the slot. As a senior it would be his backfield. I don't think anyone outside of the Irish program expected Teague to blow up like he did.

Needless to say everyone knew his name by the end of his Senior year. The honors continually rolled in, along with the scholarships. At the beginning of the year it seemed that the end move for Teague would be to go across the street and become a Penguin like his former teammate Allen Jones. But he managed to play his way into division 1 with offers from MAC schools, and then with offers from BCS schools. In the end it came down to UC and Wisconsin. After selecting UC he became the first Mr. Football from Ohio to cast his lot with the Bearcats. (And yes, I am fully aware that Ben Maul was Mr. Football as well, but he didn't sign on the line with UC). Ursuline rode Teague to a third straight state championship and was arguably the best team in the state last year, regardless of division.

We might as well start with the only real negative about Teague as far as I can tell. He isn't big. In fact he is rather short. He is listed at 5'8", but I think we all know that's a touch generous. Football coaches like to do that in general, Football coaches at small schools love to do that. (speaking from experience). In reality he is probably closer to 5'6" than he is to 5'8". While he is short, he isn't little. The phrase put together comes to mind. For me the most impressive thing about is his lateral quickness and with that the balance. But Teague isn't a finesse player, he can bring the pain. He does things that other guys just can't do. I know this is going to throw most of you for a loop but the player that Teauge most reminds me of Is Maurice Drew nee Jones-Drew back in his high school days at De La Salle in Concord, CA. The builds are pretty much the same, the running styles are the same, both are excellent pass catchers and run with deceptive physicality. I mean shit, they even look similar. 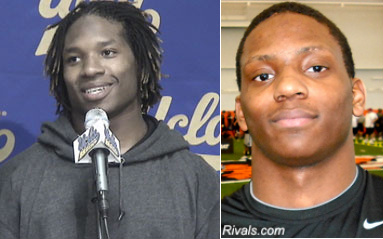 Am I saying that Akise will go onto a multi year NFL career filled with Pro Bowls ect? No, I know the odds of that happening for anyone are very long. But the first time I youtubed Teague that is the comparison that jumped to the forefront of my consciousness. Primarily because I was a little bit obsessed with the De La Salle streak and read this and bought this, both of which feature Jones-Drew extensively.

I think that Teague has a chance to contribute right away. I just don't think it will be as a slot receiver or a running back. I think that his ability as a return man will get him onto the field relatively early. There is a certain knack for the return game that Teague appears to possess, that was not present on the team last year. Mardy Gilyard had it and I believe that Teague does as well. While a red shirt year might do him good in his quest to be an every down back here at UC. But his potential value as a returner is enough to keep the red shirt off him. I don't know how he will turn out as a back, but if he can become a player like Brandon James was at Florida that would appear to be a win, win.