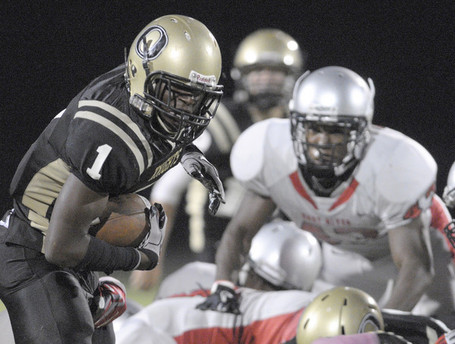 For the life of me I can't quite figure out why Orr wasn't more heavily recruited. A simple youtube search turns up ample visual documentation of his athletic exploits. He clearly has talent in abundance. He played everywhere for his high school team, QB, RB, WR, DB. Ultimately Orr is going to be a defensive back at UC. Though he might double dip a bit and return kicks.

In terms of the process he did all the things a high school player should do to get noticed. He hit the combine circuit making appearances at combines in Jacksonville and Bradenton in the spring of his Junior year. According to his coach he had a solid performance at the Bradenton event.

"He can hold his own out there with Nick Waisome," Gomez said. "If you would put a mask over their heads, you'd think they were the same person.

Waisome was one of the top cornerbacks in the country and signed with Florida State. I am not inclined to believe everything that high school coaches say about their players. There is an unerring tendency towards hyperbole in those circumstances. But Orr certainly has a ton of athletic ability, certainly more than his offer sheet would suggest. His first offer didn't come until late in May, and it came from Colorado State. Part of the problem could have been his High School. Ocoee hasn't been a hotbed for BCS ready athletes in the past. Again from the same coach.

"He believes Trenier is one of the top corners in the state," Gomez said of Orr, "which is exciting for us because we haven't had a kid like that at Ocoee ... ever ... getting recruited by the top programs.

Recruiters tend to stick with the programs they know. In a state like Florida, where the top programs produce scores of players it can be surprisingly easy for a player from a school that is off the recruiting map to get lost in the shuffle and that seems to be what happened with Orr. Oh and the whole "committing to UC" process seemed a little, convoluted.

Orr is a good enough with the ball in his hands that he could be a collegiate starter as a slot receiver. But his best position is Cornerback without a doubt. The one thing that you should always look for is flexibility in the hips. A coaching staff can always teach proper techniques and alignment, but you can't coach hips. A player either has them or he doesn't. Orr does. He isn't tall for a corner, but his height is probably slightly above average. For his position he is good tackler and can be a big hitter on occasion. His ball skills are pretty good as well. In my estimation Orr has all the athletic ability needed to be a good field corner at the BCS level.

Junior highlights if you want them.

I like a lot of things about Orr. The thing that I like best about Orr is that he has a chip on his shoulders from the way the recruiting process turned out for him. There is a really telling article from the Orlando Sentinel about his lack of offers early in the process. This quote points to the chip on his shoulders theory IMO.

"I'm really surprised because it feels like I'm one of the best athletes out there and I should be getting as much attention as any other corner or athlete," Orr said.

That confidence and belief in himself will almost certainly pay dividends down the road, especially at corner back which is a position where having that self belief isn't a bonus, it's mandatory. There is a chance that Orr could crack the two deep this season. The entire secondary is still in flux, and most likely will be all year there is a chance he could make a run at the two deep. Still, I don't find that exceedingly likely and think that Orr will probably take a red shirt before mounting a challenge for the job that Dominique Battle will be vacating come January.