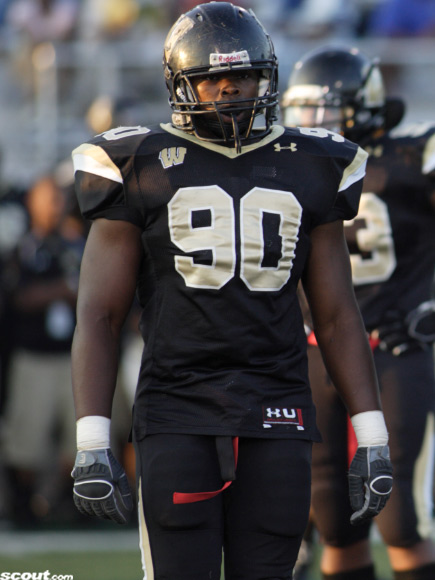 The dawning of the month of May has done little to stem the tide of the Butch Jones recruiting. Jones received a commitment today from Indianapolis Warren Central Defensive End Jonathan Burt. With this commitment the class of 2012 is already a quarter full, maybe more depending on how many prospects will be taken in 2012. Burt is the 6th defensive recruit in the bunch, and the third one from Warren Central High School in Indianapolis. The other two Warriors preceding Burt are Deionte Buckley and Josh Posely, the first two members of the class of 2012.

Burt is not quite the athlete that Posely is. His first step is a little bit slower than I would like in a defensive end. But what he lacks in terms of get off and sheer athleticism he more than makes up for in his work rate and Football intelligence. I hate, hate, hate the "high motor" cliche when it comes to defensive linemen, but it is apt here. Burt never gives up on plays. Arguably his best trait is his strength. Jon Burt is crazy strong, and you can see that in the way that he splits double teams by just running through both guys rather than turning his shoulders and splitting the gap as people are taught. I have no doubt that Burt is going to be a productive player, I just question where. He could be a defensive end, but he could also slide down as an undersized 1 technique defensive tackle. I like this pick up and the way that Jones and Co. are working with this class. The needs for this class are going to be defensive, there is still precious little depth on that side of the ball. Early that much is clear, 6 of the 7 commits in the class of 2012 are defensive prospects and what's more every one except Drake Bruns had at least one other BCS offer at the time of their commitment.