May 30th Jump Off

Share All sharing options for: May 30th Jump Off

Finan, Somerville Advance to NCAA Finals - University of Cincinnati Official Athletics Site
Way to see Eric Finan, Terrence Somerville, and Kathy Klump make it to the NCAA Track and Field finals. The finals will be on June 8-11 in Des Moines, Iowa.

Mardy Gilyard on his way out of St. Louis
Clearly Mardy's limited time in the NFL hasn't gone how neither he nor any of us probably envisioned for him. I'm not sure about the reputability of the report but if what he's saying is anywhere near true, Mardy better get his act together at the next level like he did at Cincinnati.

Catching up with Jeremiah Davis
Great read by Chad Brendel over at Bearcat Lair. I'm really excited to see Jeremiah and the rest of the 2011 class in Clifton in a few weeks. I think we'll see both Jermaine Sanders and Shaq Thomas push for starting time next season and both Jeremiah and Gelawn Guyn fight for the PG spot behind Cash.

A fond farewell to the Big East blog - Big East Blog - ESPN
Don't know if you follow him, but Brian Bennett over at ESPN will be leaving the Big East blog to help Adam Rittenberg cover the scandals and controversy in the Big 10. In the midst of all of the bullshit coming out of the rest of ESPN about how the Big East should lose its AQ status and be dissolved, Brian seemed to stick up for the conference and give equal coverage to its members. His replacement is Andrea Adelson, who covered the non-AQ schools. I don't know much about her so if could leave me a comment below regarding her writing and how you think she will do replacing BB, that would be great! 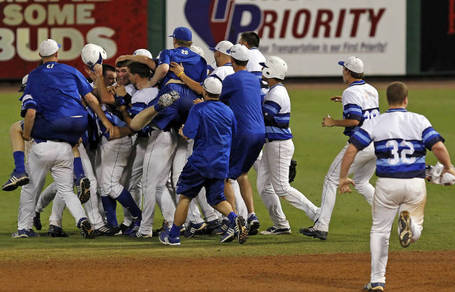 The Big East Obituaries: DePaul University - Voodoo Five
Don't know how I missed this but Voodoo did a pretty good obituary on DePaul, who will be relegated to being obliterated by Butler in the Horizon League come a Big East split. Sure they'll probably have a few more years of being the Big East's pincushion, but at least they can look forward to fighting with UIC for their new league's bottom feeder crown.

SU's Jim Boeheim not sold on wholesale Big East Conference expansion | syracuse.com
While Syracuse basketball coach Jim Boeheim doesn't necessarily believe the Big East will expand to a 12/20 format, he does think that another football school could be added this Summer. As in Summer 2011. The timeline seems right as the deadline for a team to join the Big East and play by 2012 is approaching in a couple of months.

Jim Tressel has resigned from Ohio State, report says - ESPN
It was bound to happen. No coach has ever survived the kind of injunctions committed under his tenure. Don't think this will stop the NCAA from hammering O$U, as the buck didn't stop at Tressel. I'd be curious to see who the school goes after to replace him.

7-on-7 high school football draws scrutiny of NCAA, high school coaches over fears of third-party influences - ESPN
Very interesting story about the emergence of offseason 7-on-7 camps over the past few years and the controversy between helping kids get exposure to colleges (coaches aren't permitted to attended these camps) and 7-on-7 coaches possibly taking money for 'guiding' their players to colleges.

Ohio State apparently turns a blind eye to football scandal and Big Ten should share blame
It's ironic that a conference that prides itself on a history of 'legends' and 'leaders' pretty much goes silent amid the investigation of Ohio State and Ray Small's comments last week about selling his gear. At least the SEC knows they suck at following rules and their commissioner comes out and answers questions about it.